As I mentioned before, Baby has warts on his hands. Lots of 'em. They don't bother him at all, but they're really pretty nasty looking.

Brace yourselves for the visual. 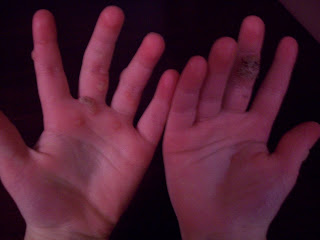 After two failed attempts at removal (via LIQUID NITROGEN, people. ON MY 3 YEAR OLD.), I put my foot down and said NO MORE. Because poor Baby was being traumatized. Traumatized and hurt. Just the mere mention of the dermatologist's name made him burst into tears.

We decided to get a second opinion.

Yesterday was our appointment. Just me and a very nervous Baby. 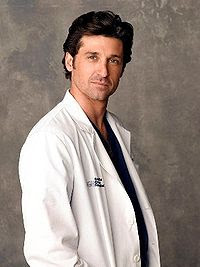 But not only was he dreamy, he was so so kind. He took one look at Baby's hands and exclaimed, "I would never treat a 3 year old with liquid nitrogen. It's painful."

He instructed that we should proceed the old-fashioned route (which is longer and more tedious for the parents, but pain-free for the child):

So after Baby's bath, I need to attack his warts with an emory board and scrape the top layer off (ewwwww). Next, a teeny tiny drop of Aldara cream should be applied to each wart. (And yes, apparently Aldara is normally used to treat external genital warts. Double ewwwwwww.) And then the warts need to be covered with either duct tape or hockey tape (to smother them).

The dermatologist said that it could take from 2-4 months for us to notice a difference.

Last night was our first attempt. Baby was NOT happy with this new routine. A few of the warts started bleeding as I scraped. The duct tape was cumbersome. He couldn't bend some of his fingers.

I had to use my Mommy Persuasion Skillz and come up with a diversion.

Hence, Baby now thinks he's really and truly Spiderman. And that the silver duct tape on his fingers is where his spiderwebs shoot out. Which is pretty damn cool to a 3 year old.

Huh. Today is a most historic day, and here I am blathering on about warts. Shocker.

And did you enter my contest yet?

Genius diversion! Poor little guy, it must break your heart!

oh poor thing - I hope this works too! Good job on the diversion. Genius!

It's all history, warts and all. Ba-da-bing, ba-da-bang.

Hope it starts to make a difference sooner rather than later.

DUCT tape on his hands?????? Man that stuff is really versatile!

Poor little guy! I guess Dad and Red Green were right. You CAN fix anything with duct tape. I hope it helps.

I wouldn't worry much about the scraping. I did this exact routine with my DD - minus the scraping. Soak hands, put on lotion - apply duct tape. WORKED GREAT!!! Took maybe 6-8 weeks but her warts (also on her hands and gross) were gone. Have NOT come back (2 years ago). Good luck!

oh yeah - and you can get Duct tape in many different colors at Michaels craft stores. In ccase you want to mix it up!

Poor kiddo! I hope it works for him!

Poor thing! I hope it works quicker than anticipated!

Poor little guy... and poor you! I can't even imagine. I can't believe there is nothing else they can do for him!

It'll work - just persevere! I had 12 warts on the heel of my right foot - I did the same routine but only scraped a few time a week. All gone within 2 months - just peeled right off - EWWWWWW ;)

my hands looked like that from when I was about 8 until i was about 15. I had warts all over both hands and all over one foot. It was painful. I am sorry your boy is dealing with it. Both my children at aged 3 and 4 have them all over their soles also. it makes me sad knowing I gave it to them (through genetics)

I hope he feels better soon and the treatment takes well.