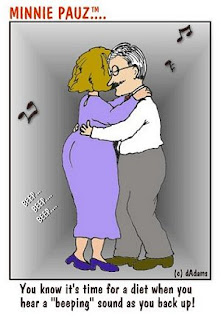 Along with Baby's dermatologist appointment on Monday, I also had scheduled a few appointments for myself, taking advantage of the day off from work.

Frankly, though, I'm not at all surprised (I was actually mentally prepared for a worse number of poundage than that.)

I do soooooo well at work. A Fiber One bar or low sugar oatmeal in the morning, followed by a banana. A Lean Cuisine or soup for lunch. A cheese stick. Microwave popcorn. Sometimes I get crazy and mix it up with yogurt or a green apple. I feel like an old man because I literally eat THE SAME THING EVERY DAY.

Ideally, I'd like to be consuming about 1,200 calories per day...But when I get home to the Trenches at night? I turn into a human vacuum. I eat my meal, and then the rest of the boyz'. I eat without thinking. Mindlessly. Automatically.

Last night? I swear, I must have eaten about 47 raviolis. And then hated myself.

And hated myself even moreso this morning when all my work clothes felt tight and frumpy.

It's a vicious cycle, between the eating binges and the sporadic exercise.

MUST GET ON TRACK. So my new "thing" (I always have a "thing") is this: I will continue to eat healthy (and boring and routine) at work. But at night? I'm going to try a SlimFast shake instead of a meal. And then be DONE. I'll still sit with the family, but will refrain from the gorging. (Any other suggestions as to a healthy meal replacement-type drink? Besides the cans of SlimFast? I don't want to have to haul out the blender every night.)

I have to do it this way, for now, because I'm the all-or-nothing type.

Same goes for exercise. I can either work out 5 mornings a week at 4:45 a.m. or else not at all. No in-between.

Question: Should I have a mammogram now? At age (almost) 36? It would simply be a baseline until I turn 40 and get them done yearly. My doctor left it up to me. I have no family history of breast cancer. 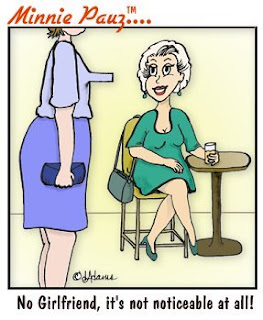 And then, it was on to my eyedoctor.

Shocker, not only have I gained 8 pounds, but my eyesight has (further) deteriorated. And I was also told that I wear my contacts for too many hours per day (at least 16) and need to give my eyes more of a rest because they're not getting enough oxygen.

Fat, gray and blind. That's me.

Apparently, I'm the one on the right.
Posted by Sarahviz at Wednesday, January 21, 2009

Not sure if this will be of any help, but I'd recommend you give yourself something to eat before bed too. Given what you eat at work and only a Slim Fast drink for dinner-- you're going to be starving come bed time. I don't know about you, but I can't stand to go to bed hungry! Maybe a bowl of cereal? An apple with peanut butter? Don't set yourself up for failure.

I'm with you though-- I'm an all or nothing kind of gal too. And I do so much better at work as well. ~Kellie

I have the same problem - Eat my meal, then finish up what looks good left on the kid's plates - all 3 of them! - I should give more of those leftovers to the DOG - make him all fat and lazy instead of me!

The one on the right looks about to bust a cool dance move at least!

The eye thing - me too. I try to take mine out and put glasses on when I get home from work. It does help.

I like the Slim Fast shakes and I've used them before. Like tea? I can always do a cuppa tea with honey and for some reason I'm happy.

i think the little gray mouse is the cutest one :)

ps - so sorry about baby's hands and your new routine. not fun friend. but nice touch on the spidey power!

Couple of pointers - ditch the popcorn and the apple at work...berries are far healthier for you (apples are quite caloric - over 100 each) and the popcorn is hard to digest and has no nutritional value.

As for the baseline mammo...go. I had the opportunity to do one at 35 and ended up pg, so I never got it done. I'll be going in for my first one at my next appt (since I hit 40 a couple of weeks ago)...I really wish I had done that baseline one, just as a marker.

yes, do a baseline!!! I have found they really don't hurt!

Try low carb, if you haven't yet. You don't have to starve or feel too deprived...just eliminate sugar, flour and most white or processed things. I have lost almost 80 lbs in a year with it. If you haven't click on my before and afters on my blog..it's something I know I have to continue forever, because I am an addict of things like cookies and ice cream if I don't!

I am a big nighttime TV snacker...I have to work on that!

I am 35 and I am having my first baseline done in a couple weeks, but my mom has had b/c twice.

I have a huge problem with overeating. Sometimes I think it could even be classified as some kind of eating disorder. I don't gain tons of weight from it but it's slowly catching up with me as I've gotten older. I have supper and then I go back for seconds, no matter how hard I try not to. Then I feel awful afterwards, just sick, and mad at myself, and fat. I have a problem with exercise too, I just can't stick to it. at all.

I hope you have better luck than I have, one of my other big problems is eating at night and I know that's a big no no.

I had my first mammogram a couple of months ago, should have had it earlier because I do have a family history (mom), and it wasn't exactly the most comfortable thing I've ever done... but I'll say this: I felt SO MUCH BETTER after I did it. Like I was really doing something proactive for my own health, which I don't do often enough. I recommend it.

Re: a baseline mammogram... according to my GYN, a baseline is no longer recommended, for anyone. Research has shown that it wasn't useful in making comparisons so within the past two years the recommendation to have one has been eliminated. Take those thoughts for whatever you feel they are worth...

I've also heard that there are a lot of false positives for baselines before 40, but any time I have a chance to run a test to benefit my health, I do it. I had my first at 37 and will start yearly this year.

As far as SlimFast - we used to be a big SlimFast house until we started practicing Weight Watchers. One of the only programs proven to work because it's not a "diet" or quick fix. But I suppose it all depends on how much you want to lose and how long you want to drink the shakes for? Good luck.

If no fam history I am on the team that says baseline at 40 (be prepared to check out your insurance for coverage earlier than that)and then NOT every year. I did my first at age 40.5. Being "small" a/k/a "dense" they then wanted to do an u/s so they'd have a really good look. At age 46.5 I will be having my 3rd. Some ladies have them every year yet it is their own hands/eyes that find something.