Our 7-year old has learned an important lesson.

He learned that a child can, indeed, hurt a parent's feelings.

Yesterday afternoon, Hubby and Eldest, Nike bat bag and baseball gloves in hand, excitedly headed to the indoor batting cages in town...even though there's a foot of snow on the ground and spring in New England seems eons away...

They were gone for about an hour. But when they returned to the Trenches, both trudged dejectedly in the back door, heads down, eyes lowered.

"What's wrong?" I asked, knowing that something must have happened.

Hubby answered tersely, "Ask your son" and left the room.

When I questioned Eldest, he just shrugged his shoulders and walked away.

The Trenches felt heavy with unspoken tension. Hubby barked at Eldest to put his baseball stuff away and then reprimanded him to pick up his sneakers.

And then? Hubby sulked on the couch. Notsomuch mad sulking though. It was a sad kind of sulking.

Something was definitely amiss.

When I finally got a chance to speak with Hubby alone, he told me what had happened.

None of the other father/son groups had shown up to the batting cages, so it was just Hubby and Eldest. (Meaning Hubby alone had to pay for the entire hour that the batting cage had been booked, so Hubby forewarned Eldest that their time there was expensive, so they needed to make the most of it.)

They played catch. Eldest didn't want to use 2 hands (as per Hubby's instructions), so the ball kept popping out of his glove.

Eldest wanted to bunt. Yet he wouldn't listen to Hubby's advice on how to do it properly.

He insisted on using a bat that was too small for him.

All of these behaviors? Age-appropriate, certainly, for a 7-year old.

And Eldest, from the backseat, spoke:

"I don't want you to teach me anymore."

(That was Hubby's heart, shattering.)

Hubby's eyes welled up with tears as he relayed all this to me. He went on to to tell me that when he was growing up, his father was always working. Athletics weren't important in his family. That he played sports and learned and practiced all on his own. With no parental involvement whatsoever. And that all he wants for his sons is to BE THERE. TO BE INVOLVED. For them to know that their father is there to help them, to guide them.

And then my eyes welled up.

So when Hubby left to take a shower, I approached Eldest. I put him on my lap and asked gingerly, "Geez, Daddy sure seems sad. Do you know why?"

He shook his head tentatively.

"I think his feelings are hurt. Do you think maybe you might have said something to make your Daddy sad?"

Instantly, recognition fell over my son's eyes. It was definitely a light bulb moment for him. And he began to cry. Hard.

I tried my best to comfort him, but at the same time, I wanted to make sure he really knew how much his words had hurt his father.

And then? We were BOTH crying. My 7-year old, curled in my lap, sobbing his eyes out, while I rocked him and tried to make him understand his father's pain amidst my own silent tears.

Eldest got it. He really did. He wasn't crying the dramatic tears of "Gosh I'm in trouble and I better make this good and dramatic" or "If I cry, maybe I won't be in as much trouble."

I honestly could tell that his own little heart broke once he realized that he really, really had hurt his Daddy's feelings.

Anyway, once Hubby got out of the shower, I instructed him to go talk with a very upset Eldest in Eldest's bedroom. Behind closed doors, they had a father-son talk (of which I'm not privy) amidst more tears and hugging. And forgiveness.

And so, on this day, his 39th birthday, this one goes out to Hubby. For being the absolute best man, husband and father a woman could ever dare dream for. I'm so very lucky and blessed, indeed. 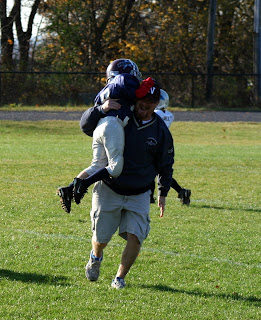 To become a father is not hard, to be a father is, however. ~Wilhelm Busch
Posted by Sarahviz at Sunday, January 18, 2009

Awesome post. Tough lessons, but important. He will look back one day and realize how lucky he was to have a dad who cared.

hugs and birthday wishes to an amazing daddy.

Happy Birthday to him! That made ME get all teary, too!

ok, that totally brought tears to MY eyes!

Being a parent is TOUGH!!!
I'm glad that hubby and Eldest made up.

Awwwww - all that crying made ME cry!
Tell your hubby happy birthday for me (I'm 39 today, too!)

That is one of the sweetest, most touching tributes to a man that I've read..
Thank you for sharing.

Awww. That's a very hard lesson for any little boy to learn. I'm glad everything was sorted out.

Happy Birthday to your honey.

What a great story. Glad it turned happy in the end.

Happy Birthday to your Hubby!

You cow! You have made tears form in my eyes. That is forbidden.

What a beautiful ending.

I got teary eyed. I'm at work so I'd better stop. Ode to all the coaches out there who've coached my three sons on their myriad of baseball, soccer and football teams. It is a tough time coaching own son. Mine enjoy my husband coaching them more and more after age 10 or so.
--Michele in Atlanta

Happy Birthday to your hubby!!!

Where did I put those stupid Kleenex?

This was heartbreakingly beautiful. I'm glad everything was sorted out.

awwww...tears. What a good father.

jeesh... now I am crying. Happy Birthday to your man!

This is my first visit. Thanks Bossy. I couldn't stop after the first entry and kept reading. Now I am literally shedding tears. What a sweet sweet story. Does sound like you have a pretty amazing husband.

Oh wow. What a great post. I saw it on Text Imps.

Yeah, ok, it's 2 years since you wrote this but I like to look through every once in a while and read your old blogs. You made me cry. Tough to do but you did it.