Both Hubby and I hate how politically correct childrens sports have become.

There is no keeping score. Thus, no losers. Everyone's a winner! Yay!

Well, guess what? That's not realistic. And it's certainly not preparing our children for the sometimes harsh cruelties in the real world.

And guess what else? It's a fact. There ARE hierarchies. There ARE winners. There ARE losers. In many different facets of life, most certainly athletics.

Practically since their birth, Hubby has fostered a healthy appreciation of and for competition and fair-play in our boyz.

(His own non-politically correct mantra, which he indeed has taught the boyz, is "Second place is first loser.")

So the spirit of competition extends to far reaches within the Trenches, as is typical in families with young siblings:

"Last one up the stairs is a poo poo platter!"
"I'm the first one done!"
"I want the BIGGEST piece!"

And now, since we've gotten the Wii, it's become very apparent that we are definitely a family of competitors.

Trust me, I have to keep my own anger and frustration in check when my 3 year old KOs me in boxing and my 4 year old crushes me in tennis, when all I really want to do is stomp my feet, throw the remote, and let loose an endless stream of curse words. Which I do - that is, when Hubby and I are playing against each other after the boyz are in bed.

Always say "good game", whether you win OR lose.
No bragging if you win (a tough one for Eldest right now).
No crying if you lose.
Try your best.
Try, try again.
Use only KIND words to cheer on and encourage.

The other day, as I was remarking to someone how Eldest and Baby had both been sick, Middle, who was listening, piped up.

"Hey Mom! That means I'm the winner of the sickness!" 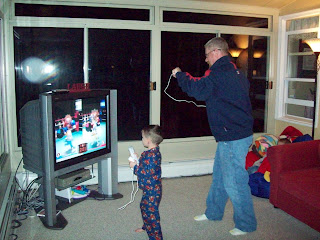 Float like a butterfly, sting like a bee. Alternately titled: Kicking Daddy's ASS in Wii boxing.
Posted by Sarahviz at Friday, January 23, 2009

The officials may not keep score, but I still ask them (the children) what the score was and they ALWAYS know!

Competition is good for children. You are very right!

Like Jenni, my kids always know the score, written or not! But, I do have to say, that's one of the things I love about Upward sports. We participate in basketball (because we have the grace of, well, NOTHING and suck wind on the court) and without the pressure of scorekeeping, the focus is on the skills and teambuilding (which is one of the premises of Upward). It is perfect for the Klutz out there (aka my child).

I don't see the point of not keeping score. My oldest did wrestling this year and they didn't do winners or losers either, the officials kept score, but they didn't tell the kids who won or lost, they held both of their arms up at the end of the match. They even did that at the tournaments and I was really surprised. In wrestling, it's sometimes hard to tell who won or lost so sometimes we wouldn't even know right away (until we asked) and my son would be thinking he lost, only to find out he did actually win.

My oldest sons are very competitive with each other, about everything, from who gets done with supper first to who gets out of the bathtub first! I don't get the no winners in sports thing at all. When you win, it's such a great feeling and great for a childs self esteem I think. If you lose, that just means you need to improve your skill and keep working at it. It's not the end of the world.

Yeah, what is the POINT of playing if you don't win or lose? For fun? BUT THE FUN IS IN KICKING THE OTHER TEAM'S BUTT! :)

I totally aggree with your sports theory. Whoever started the no keeping score, everybody wins crap was probably the kid that was always picked last in gym.

The wii looks so fun - I may have to start saving up for one. We are out of the loop!

Is that your hubby wearing a winter coat inside?

OMG how true. Especially with three. My girls race at everything, from how fast they can eat to who gets to the van first (not that anyone can get INTO it until I unlock it. It's annoying, but if they can, they will compete. And yes, the Wii brings out the best/worst in them. Mario Kart is their current competition.

What about youth sports who give out trophy for everything? My kids have so many trophies, it's not funny! And they are meaningless. The best is the ribbon.

We race to finish our milk and burp...I know, I'm such a lady. Every time she wins Avery says, "I did it. I bited you!"

We don't have kids, but your husband's "Second place is first loser" is very reminiscent of our personal car racing mantra (we race in an amateur, but highly competitive sport) that we adopted from the movie Talladega Nights "If you ain't first, you're last." Not that that's actually true, because with us, coming in 2nd or 3rd isn't too bad, but all of our teammates tease each other with it all the time!

My son did the whole tee-ball thing one year, where they don't keep score. They didn't even get called out!! When pee-wee ball came around, the kids were all confused. They didn't understand the concept of "you're out and don't get to run around the bases." Seems to me like it just causes confusion.

Andy went to a highly competitive high school and there, he learned his mantra: "Excuses are for losers."

We also like "Do or do not. There is no try.", learned from Yoda.

The hard part is keeping that competition 'healthy.'

Where did the not keeping score come from? I mean - what's the point, right? We SO keep score in our house. Life isn't all peaches and cream!

Also - I want to thank you for the "it gets better" posts you have done in the past. I remember them often. We had a shocker, born 14 months after our middle. We have 3, 3 and under, and are just now digging out! (baby is 8 months).

Thanks for the inspiration!

This is one thing I love about hockey. They start at the youngest age with referees, scorekeepers and in certain leagues - if you don't come in first place? No trophy.

My daughter's principal decided that FIELD DAY was too competitive - pitting those classes against each other - and now they have a day filled with "non-competitive fun" (to quote the flyer). And if you win an award -she calls you out of class to tell you or sends a letter home and then instructs you to keep it secret, so no feelings are hurt.
She. is. ridiculous.

My kids are kicking my ass at the Wii. Daily.

yes, yes, yes! keep score for goodness sake...why is teaching our kids to be mediocre okay?
i do like your "rules" and think we will adopt them in our house!

Absolutely! Although, my youngest brother recently learned how much I weigh and announced it after dinner. I about killed him. His response (pre-apology), "I was just trying to motivate you to beat mom in weight loss."

Not exactly what I wanted to hear.

I was 4th of 5 kids. Oldest was separated from youngest by just over six years. Very, very, very competitive family. I believe in competition, but I also believe in giving "head starts" for the youngest of the bunch.

And I so so so so so so so hate when "play-offs" come around each year in recreational soccer or basketball or baseball and ALL the teams play, even those with a 0-10 season. I always send emails out to the head honchos and the coaches saying they better start calling it a tournament or start leaving the losing teams out.

That is PC gone totally overboard. There is nothing wrong with healthy competition!
We love the Wii, even I get a little competitive and I am the most non-competitive person ever. lol