A Great Way to Enjoy Restaurant Dining With Children

Let me just say - we NEVER dine in "real" restaurants with the boyz. Sure, we'll hit up the local McD's way too frequently, or will venture as far as Moe's for a meal, but to sit down? With a waitress? NO THANKS. I would just rather stay home than deal with the constant fidgeting, the numerous bathroom trips, the spills, the wasting money on food not eaten, etc.

Anyway, I had to work the day before Thanksgiving. Hubby didn't, so he was home with the boyz for the pre-Thanksgiving prep work. Which meant we had no regular food in the house for dinner. But fortunately, we had gift cards for Uno's! Gift cards that we've had for quite some time, but hadn't yet dared to use unless we were sans children. (In which case? No offense, but I easily wouldn't pick Uno's as my meal of choice.)

So that night, we tempted the fates. And went out to dinner as a family. Thankfully, I got out of work early, so we were in the restaurant before the dinnertime rush. And we got a table in the very corner of the bar area. (There's no smoking in MA restaurants so that wasn't an issue.) Perfect!

No sooner had we taken off our coats, though, then the escapades that I dread began:

(The waitress couldn't come quick enough with my merlot and Hubby's Guiness.)

Baby, who was sitting by me, tugged on my arm and said to me, "Dat man o'er dere looks like Santa."

Sure enough, there was a gentleman patron at the bar who indeed had the requisite white beard, 'stache, and bald head.

So I lied rolled with it and responded emphatically to all 3 of my wiggly children, "Yep. Yep it is. He's around, you know. He's always around, checking up on your behavior.

And from that moment on?

The heavens parted and the angels sang. My boyz? Sat quietly and ate their meals and every so often peered over at "Santa" to see if he was indeed watching them.

As we were leaving, I said to Hubby, "We should totally say something to that guy. He made our night actually enjoyable!"

Hubby muttered back, "Yeah, but he's probably half in the bag. He's been sitting there drinking the entire time we've been here."

So as we walked towards the exit, Hubby stopped and tapped the man on the shoulder and whispered, "My children think you're Santa."

And that man, bless him, turned around to face the boyz and simply said, "Hi there guys. You being good? Make sure you are, okay?"

The boyz' eyes were wide with wonder and glee as we exited the restaurant.

And thankfully, they didn't even notice "Santa's" horrendous booze breath and glassy eyes. 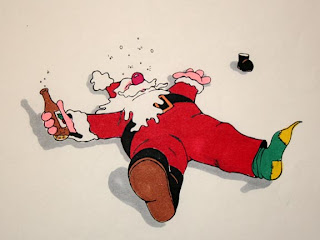 Posted by Sarahviz at Wednesday, December 03, 2008

Oh my goodness, I'm falling out of my chair laughing! That is just too funny!! At least Santa is a happy drunk, I bet that made your boys night when he talked to them! Did they comment on him drinking or were they just too in awe to notice? heehee..still laughing!

If I owned a restaurant I would hire someone that looked like Santa just to come and sit at the restaurant! How happy would so many parents be!

That's the best Christmas story I've heard in years. You should pitch it to the networks!

That is awesome!! I need to find a Santa!

Great move for the big man.

I wonder if it would work on my boys. The best we've managed is Bugaboo Creek, where RC sits in stunned terror whenever the animatronic moose starts talking.

A perfect night out with children!!! I need to find a dining or boozing Santa...LOL.

so cute
some grandpa use to come to my gym classes with his grand kids and he would grow out his beard and look jsut like santa for xmas, the kids were always in awe.

How awesome is that??? Did you get his number? Can he come out to dinner with us?

dude santa used to go to my church while we were growing up.

my parents were sooo lucky!!

Can we rent out the boozin-Santa for our nights out too?

Coulda been, you know. Coulda been. I'd be boozin' it up now if I were Santa.

LOVE it! My cousin had the brilliant idea to tell her kids that Santa's elves go out undercover to spy on kids' behavior. She told them it could be a waitress, supermarket cashier, anyone.
Genius!

LOVE it! How clever you are to use it to your advantage!

I think I may create a polite behavior superhero for the other 11 months of the year.