At breakfast, Eldest asked for a waffle. Middle ate french toaster sticks. But all I wanted was gum and candy. Mom said no, so I tried to climb up on the counter to get them for myself.

While Eldest and Dad went to football practice, Middle quietly watched TV. Mom said something about me being a "monster" and "having to keep a constant eye on me", so she made me go upstairs with her to help her clean. Except she yelled at me when I squirted the Swiffer on the carpet. And then I got reprimanded for dumping out the boxes of shoes in my bedroom after she had JUST CLEANED that room. And then I wanted to brush my teeth. That's being a good boy, right? Except I had a little trouble with the toothpaste and somehow it ended up getting smeared all over the counter. Mom just shook her head when she saw, and muttered something about wanting to move to Australia.

When Dad got home from football, he had to go to the grocery store. I heard him ask Mom who she wanted him to take with him. She said BABY pretty emphatically, so that means I must have been a very good helper.

Later, in the playroom, Eldest wrote in his notebook. Middle sketched on his Magna Doodle. I played with my toolbox. When Mom said it was time for cleanup (muttering something about how she had JUST CLEANED that room), I didn't WANT to pick up my toys, so I put even more stuff on the floor. And then I wanted to practice my throwing (after all, Dad always says that practice makes perfect) so I threw some of my toys. Wow, I have a good arm! The toys went all the way into the hallway! Apparently Mom doesn't agree with Dad's theory about practicing though. She made me stay in the playroom until I did a big clean up. I didn't like that. "You're not my best friend", I said to her. She told me that it was FINE, because she was moving to Australia without me.

At bathtime, Eldest and Middle were in the tub. I was already in my pajamas because Mom said that I had "one foot in bed already", whatever that means. When she was folding laundry and drinking her purple juice, she told me to stay out of the bathroom or else she would ship me to Australia. But I had to pee! Middle told me that it would be okay if I peed in the tub. So I did. Because he said so.

Then it must have been my bed time because Mom and Dad BOTH tucked me into my bed (I tend to get special attention like that.) Dad said something to me about "needing to have better listening ears" (I wasn't really paying attention though) and Mom said that I had just had a "terrible, horrible, no good, very bad day" and that I'm lucky I'm cute or else I would be in Australia being raised by koalas by now. 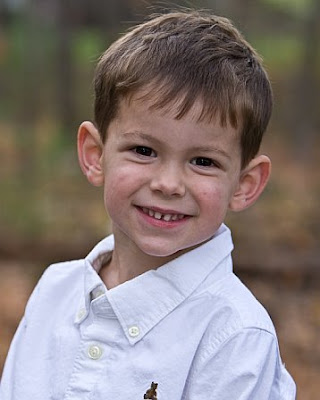 She's right about that. I AM cute. And my listening ears look just fine to me.

I'm continually amazed by the number of children who survive to adulthood. Please send the address of the Australian koalas as it may come in very handy here!

ps - i tell beans daily how very lucky she is that she is cute!!

Your Baby is adorable...and, so so smart. How many 3-year olds can write such an eloquent post??? LOL

That was absolutely heart melting! I love reading your blog because I have an 8 mo old boy. I always think about how he'll be when he's a big boy. Hopefully just as precious as yours!!

LOVE the post!! too cute, and he is sooo cute!!

Awww, those listening ears are quite adorable. But it does sound like they need some strengthening! :)

LOL! He is VERY cute! And very funny for peeing in the tub!

That is too cute!! Love hearing "his side of the story"!

Those ears! Many, many of my loved ones had/have these ears. I'm sure my kids will too.

Jessica @ A Bushel and a Peck said...

I love it. Mine have days like this ALL. THE. TIME.

We read this for bedtime tonight!

Ugh! Peed in the tub. And still they insist on drinking the water.

I have to say I love the book that your title is based on--Alexander and the Terrible, Horrible, No Good, Very Bad Day.

We give that out as birthday presents everytime we go to a party for little ones. It's still my favourite book, and I'm 38!

Maybe I should move to Australia.

Koalas make great caretakers. Do what you gotta do!

I fear the airplane would never make it to Australia if my bedtime gremlins were on board.

I am blown away by how many times a day my son's cuteness saves his life.

No traces of orange on your face, good, kind sir, so I don't see what the big deal is.