Computer is totally fixed. Recovered pictures are all in one place, but desperately need organizing. And that's not gonna happen anytime soon because there's 5,000 of them. And shockingly, I don't have about 6 hours to spare.

Living without a computer for a week in the Trenches was difficult, but good. Shit actually got done! But I'm definitely psyched to get back to my lazy-ass, computer staring ways. Heh.

*****
Pop Warner football is still going strong. Hard to believe Eldest has been playing, and Hubby has been coaching, since the beginnning of August! Thankfully, there's only 2 games left. Because yesterday's game? Was FRICKING COLD! I had to bust out the boyz' winter hats, coats and gloves. AND my Ugg boots. Very depressing. 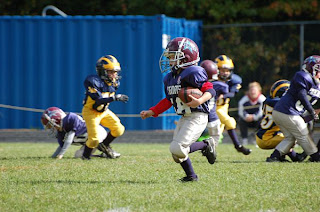 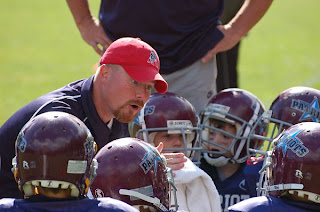 Baby has warts. Terrible ones. All over the front and back of his hands. It's viral, we know. At his 2 year checkup, he had about 10 of them. My pediatrician told me that they'll eventually go away on their own, and that as long as they weren't bothering him, that they could remain. Well, at his 3 year appointment, the number of warts had practically doubled. GROSS, I know. At this point, although they weren't bothering him, they were sure bothering ME. So in September, Hubby took him to a pediatric dermatologist to have them removed. 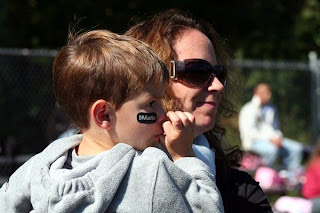 Me and Warty McWart (if you squint, you can see 2 on his middle finger there.)

He just went back for a follow-up appointment last week and had EVEN MORE removed, poor buddy. So after they zap them with the liquid nitrogen, a few days later they turn black and then fall off. Sooooo, yeah. I have random wart nubbies throughout my Trenches now. Yum. Remind me not to have Baby help bake chocolate chip cookies anytime soon.

Halloween! I always LOVED dressing up. I swear my childhood BFF and I trick-or-treated way past the time it was totally cool to do so. Like 8th grade. We were matching bunny rabbits.

And in college? Totally into it. Let's see, one year I was a cowgirl. The next year I was the actual cow (complete with blown-up rubber glove udders) and one year my housemates and I were Fruit of the Loom. I was the purple grapes.

Post-college, living in Charlotte, the dressing-up tradition continued. I was a devil, a NASCAR redneck, and my favorite? Mary Katherine Gallagher from SNL. (There MUST be a picture of that particular Halloween floating out there somewhere! Michelle? Christy? Shelli?)

(By the way? Hubby HATES Halloween. Despises it. Would sit down in Mantown with all the lights off on Halloween night if I let him.)

This year is the first year since having the boyz that we're going to a costume party, much to Hubby's chagrin. And guess who we're dressing up as? 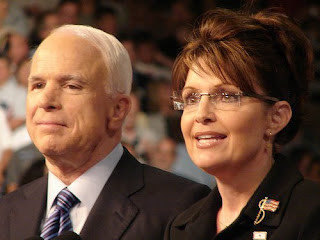 Mind you, this is in NO WAY indicative of my voting preference, people. I just happen to share the same name (and same hair color). And have a great pinstriped suit. And red patent leather shoes. Hubby has a McCain mask. But is already worried that the mask will hinder his drinking prowess. I told him he'll just have to drink beer through a straw all night.

I'm having trouble finding Palin-esque eyeglasses though. I've tried CVS and Target. Problem is? They're all reading glasses. So I can't see clearly through them. I'm sure after a few drinks I won't notice the difference, I realize, but frankly, I'm more worried about the massive headache they'll likely cause. Any suggestions on where I can find some Palin-ish specs?

Do you know anyone that works at an eyeglass store? Maybe they could loan you a pair of the display glasses? I know the Halloween stores have lots of types of glasses too, not sure about Palin ones.

Oh, or there's a website where you can order Rx glasses for super cheap (like $9) I wonder if you could get some w/ just clear lenses.

Just pop the lenses out and you can wear whichever CVS glasses get yer Alaska on.

Yes... we're in mourning over the Sox. I didn't really think we'd even get to game 7, to be honest, but then they went and got my hopes up for the World Series. I guess there's always next year!

My daughter used to have mulluscum which is a type of wart and they multiply and spread like crazy so I feel your pain there....yuck.

I'm a halloween scrooge...love it for the kids, not so much for myself. Be sure to post pics of you guys!

Welcome Back! When my younger bro had warts, my mom rubbed them every day with Jergen's lotion based on the advice of a friend. They would say, "Go to Rosario's house." Sure enough, the wart disappeared, and Rosario (the friend) got a wart! Nice, huh?

As for Halloween, buy the reading glasses and remove the glass part and just keep the frames.

Welcome back! Can you buy come CVS frames and take the lenses out?

What a great post to come back strong. Love the costume idea.

Welcome back!
Our computer is fixed too. We got the blue screen of death last week. Thankfully, we had already ordered a new Dell.

I totally need to organize our pictures too.

Welcome back!
My Princess had a wart on her sweet little nose when she was a toddler. We had to get it removed. She was not a happy camper, but it fell off and was never seen again.
Yay!

Glad you're back! Try the Christmas Tree Shop for Palin-esque glasses!

You don't have any pics of MCG?? I must dig some up, but have no idea where they are at.