ACT I: The 2 families schlep all their gear from the cars onto the beach: beach bags, boogie boards, skim boards, coolers, unbrellas, beach chairs, beach toys. The adults are loaded down like pack mules and each of the 5 children are required to carry something as they toddle along like little ducklings behind their parents. The beach is already crowded because it's high tide, so there's not a lot of prime real estate. They find a spot, a little to the left of where they entered, plunk down their stuff, and the 4 parents start setting up the umbrellas, chairs, etc. while the children already begin begging for snacks.

Hubby: Are you kidding me?!

Baby's name is called. No Baby in sight. Sarah scans the ocean. She just KNOWS that Baby wouldn't be in there.

Meanwhile, Hubby begins to walk down the beach to the left, while Mary heads to the right. Jay stays there with the children who are now all calling Baby's name and causing quite a commotion.

Sarah feels like she's having an out-of-body experience. Like she's looking down at herself-there on the beach-with her 3 year old missing. Gone.

She runs directly to the nearby lifeguard tower and gushes:

"My 3 year old is missing his name is Baby he has brown hair and brown eyes he's wearing a blue shirt with a red crab on it and a navy blue bathing suit with a lizard on it he has a boogie board attached to his wrist."

The lifeguard springs into action, walkie-talkie crackling as he begins to bark instructions into it. He puts his hand on Sarah's shoulder and begins to walk with her back towards her stuff.

Sarah is still calm. Eerily so. Running through her head over and over like a broken record are the same 4 words: This. Can't. Be. Happening.

Before they even make it back to Jay and the children (who are by now YELLING and SCREAMING Baby's name), a woman approaches Sarah and asks, "Did he have a red crab on his shirt? I just saw him down that way." as she points in the direction Hubby had headed.

Sarah feels like all eyes on the beach are directly on her.

Act III: Suddenly, in the distance, she sees them. Hubby carrying Baby, enveloping him in a massive bear hug. Baby's head on his shoulder. Boogie board still velcroed to his wrist. The lifeguard squeezes Sarah's shoulder reassuringly and turns back to head to his post.

Hubby gently lifts Baby over to Sarah. Baby's little body is heaving with sobs. He mournfully looks at her with his chocolate eyes leaking fat tear drops and yelps,

Hubby is crying behind his sunglasses. Sarah and Baby settle into a beach chair and as she's holding him snug against her body, she finally breaks down, her tears splashing onto his little round head.

Apparently, what happened was that once we found our spot, Baby just kept walking. I remember seeing him with us as I dropped all my gear. And then he was gone. Just like that. In an instant. With 4 adults RIGHT THERE.

Hubby found him pretty far down the beach. Past the next lifeguard tower. A woman (a mother, I presume) was holding his hand as he was sobbing forlornly, looking for us. (Just typing that makes me tear up.)

I don't think the entire ordeal, from beginning to (glorious) end, was more than 5 minutes. But it sure felt like an eternity.

The "what-ifs" are what keep me awake at night now, days later. There are too many to list.

Needless to say, it was a fairly somber beach day, the rest of that Friday. 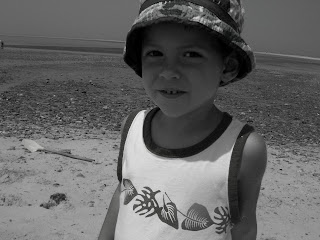 oh, sarah. that is the WORST feeling. i know.

i'm SO glad everything worked out fine.

When I was about 5, I got lost with my little brother in tow at the BIG HUGE Galleria Mall in Houston. We spent 45 minutes wandering around with security while they tried to locate my mom. She was exactly where we had been, sobbing her eyes out, looking for us. We were the ones that had wandered away, too.

I'm so glad everything worked out okay - I don't have children, but I was so scared just reading through the post....

The what-ifs could kill you. Read this article - it will make you feel better (or less alone, anyway).

Why do you always make me cry?! :) Glad everything worked out fine. It's scary how things can happen in an instant.

I cried just reading that and I don't even know you. I have a 2.5 year old so I can just imagine 5 minutes must have been an eternity.

So, SO scary! I'm glad all ended well but boy, that's the kind of thing that leaves you shaky for a long time, doesn't it?

Oh, WOW! That is scary! I am so glad you found him safe and sound!

i clutched my heart and had to wipe tears from my eyes.

i can't imagine how scared you were :(

Oh Sarah, I just teared up reading this. What a horrible feeling. I am so glad he is ok!!!

Hope the rest of your vacay was smooth! :)

Friend- my heart dropped to my stomach. I cannot even imagine that feeling.

I'm so glad everything worked out!

How scary! It's crazy how quickly they can get away. I'm glad he was found quickly.

That is so scary. I'm glad it all worked out well. When my youngest (last summer) was just under three, the first place she would have gone was the ocean. And she didn't know when to stop!

I felt sick to my stomach just reading this.

We too had a nightmare of a scare this summer at the beach when SB almost drowned. It's over a month later and I still find myself replaying the horrific scene in my head over and over.

I'm so glad you found him.

Time does seem to stretch on and on and on at moments like this. And the 'what-ifs' can kill you but you can't stop thinking about it. Your survival and mommy instinct just wants to hash it out over and over again trying to figure out how to not let something like that happen ever again.

He's safe. You're all together. I hope getting your thoughts out here help you get to sleep a little faster tonight.

Oh, honey. That is the worst feeling - and you captured it so well I (and I'm sure half your readers) are re-living our own similar experiences. I'm so glad everything ended well. Try not to keep poking at it like a lose tooth - it really does happen to everyone (or just about). It took me (after mine) DAYS to sleep again. Anyway - I am THRILLED it ended OK. Big hugs.

We all have those stories...that's why we all relate to yours to the point of tearing up while reading it. I'm so glad yours ended well.

I remember losing my parents on a beach when I was in seventh or eighth grade. We were at Myrtle Beach, SC and it wasn't any less scary at that age!

OMG. This makes me anxious and fearful and sad just reading it....I cannot even begin to imagine how you were feeling! I am so glad that it has a happy ending! Poor little guy!

I am crying. I am crying for you and your what ifs and my what ifs and the pain and anguish. Forgive yourself, please let it go. You'll feel sooo much better.

I am so glad it all worked out okay. I feel some sort of connection to the woman who was holding his hand and helping him look for you. Having worked in the public library the lost child scenario happens more than you may think. Whenever I see a child looking lost I just HAVE to help them and stay with them until we can find the parent.

OMG! I got chills reading that! Glad baby is safe. Love, MB

I felt panicky for you just reading your post. I'm glad Baby was found safe and sound.

Oh, man, hon. That was a knife in my heart. There isn't a mother alive who could read that without her heart in her throat. I'm glad he was safe.

Worst feeling in the world. I have goose bumps just reading it. It happens so. damn. fast. And poor Baby. He must have been so scared.

My boys and I always have the same conversation; "if you can't find me, find another mommy."

oh, oh, that made me cry, I am so glad you found him safe & sound. my brother got lost once just like that... we turned the corner & he kept going straight-- he was found hours later miles away, poor guy, totally exhausted but otherwise fine. I still remember the panic. what sweet relief it must be to have your baby back in your arms!