You Must Be This Tall: The True Story of One Very Small Mother

Woah. I feel like I just walked into a hotel room, unfamiliar and not mine. And like the dork that I am I run to the bathroom to check out the free shampoo and conditioner, the little packet of q-tips, the paper banner running across the lid of the toilet as if sewage were a beauty contest and this particular toilet has won the coveted title of Miss Cleangeniality. I turn on the tv to see what channels I get, check the bedside table drawer for Gideon's Bible. And then I settle in, clean sheets and a $7 bottle of water. This is not my blog but it is for the night. I am filling in for Sarah while she's hopefully somewhere far away in a hotel room of her own complete with big fluffy bed and cabana boys. When you're done here please come visit me at my regular haunt, Petunia Face. There you'll find wet towels on the floor and the bible has gone missing. There is no room service, but we do get cable... 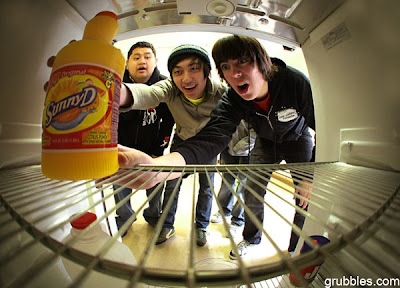 I wanted to be the mother with the Sunny D. The one with a trampoline in her backyard for the neighborhood kids, the one with a fridge stocked full of Oscar Meyer deli meats and a pantry of Pop Tarts. Hell, I wanted to be a mother with a pantry. But I'm not. I have a cabinet in my kitchen with some stale Goldfish and granola bars, the ones with raisins no less. And I have a feeling that if a gaggle of teenage boys ever descended on my kitchen stinky and awkward, thirsty and all "Hey, thanks for the Sunny D, Mrs. M!" I'd have to shoo them out the back door for tracking dirt onto my kitchen floor and drinking out of the container. This past weekend I took Zoey to the play structure in the mall, a 20 foot enclosure with oversized animals: a giant domed turtle to sit on, a dragonfly with an eight foot wing span. Colorful flowers and a bridge to climb up and then slide down. Inside mothers sit on benches lining the perimeter sipping Starbucks and talking on cell phones. At the entrance is a stork with a little cartoon blurb that says "You must be shorter than me to play inside!" For the record, the stork is 42" tall. Zoey is two. Two years old and a hesitant girl. She likes to warn herself of danger. Cuidado! she says, even though we don't speak Spanish. She loves Dora and The Map; she loves it even more when Boots says seat belts! So we can be safe! And so I watched her this past weekend in the mall playground, the way she stood there with her head cocked to one side, sizing up the monstrous turtle, the slippery backside of a duck. The way she touched the bright plastic fish to see if it was hot before she climbed on top. She is 32" tall; the kind of girl who would rather get off the swing than fight for it. She probably got that from me: her sense of danger. I was the kid in the After School Special that said we should probably tell the teacher. Get some help from an adult. Steroids are bad and drinking's not cool and shouldn't you slow down? Just a little bit? I never needed a cautionary tale because my imagination was far better than any Aesop. And now there is Zoey. Small and sweet and passive. And suddenly I want to run faster, climb higher, push the big kid out of the way because dammit! I may not want to swing but my daughter does! At the mall playground there were some older boys. And by older I don't mean 12 year olds with angry complexions and an attitude. I mean six year olds, maybe seven. Nice kids, sweet kids, somebody's baby even if that somebody was most likely sitting on a bench drinking a frappucino and not paying attention. Because these kids? They were leaping from the turtle to the bridge, onto the dragonfly and back to the duck, huge size huge tennis shoes flailing behind them, legs and arms pushing and jumping and screeching inches from Zoey's head. These kids? These kids were at least 52" tall. The mother in the Sunny D commercial would have shaken her head, exasperated and pleased. You know boys, she would have said directly into the camera. And then she would have pushed up the sleeves of her button up shirt and unloaded more orange-flavored drink from the tailgate of her Suburban. But I am not a Sunny D mother. I was wearing an Old Navy t-shirt and flip flops. Zoey's sippy cup was full of water. So I looked at the stork and then at the boys again. You must be shorter than me to play inside! The boys leapt over Zoey's head and pushed her out of the way because they were playing a game where everything blue was lava and she was standing in the way of them not stepping on blue. And I saw red. Suddenly there I was in a playground at the mall glaring at six year old boys. Giving the stink eye to a tow-headed kid wearing plaid shorts. Pffting and tcchhing and hhhhhh! at a booger-nosed boy on a dragonfly. And the absurdity of it struck me. Because how do you teach your child dog-eat-dog when really you'd rather have a salad? How do you foster her back bone when it is her butter soft body that makes her so delectible? And how do you maintain your integrity when being passive aggressive toward six year old boys? Maybe the answer is: you don't. You can't, and Sunny D is an orange-flavored drink with less than 2% juice. I will never be the mother with the neighborhood trampoline in the back, but I will always be the mother who pushes the big kid out of the way of my daughter.
Posted by Petunia Face at Tuesday, July 29, 2008

I am a mom of older kids and a mom of little ones. There is a place for all them in the world. Just sometimes not the same place. This post was lovely.

Having two boys, I know reality set in when I realized that while I did. not. want my boy to be the bully, in no way did I want him to be bullied.

Luckily this has worked itself out very nicely as my 3yo is nearly capable of kicking my 5yo's ass.

Nightly showings of Cain and Abel in our very own livingroom.

Its so hard--to teach them not to be the bully, but to stand up to the bully...I am trying to figure out that very thing. Great, great post.

You go girl! When I'm a mom I want to be just like you! Who needs the Sunny D mom anyway?

My daughter is the same, a 2 year old, passive and sweet child. All the kids who bump her at those play things, she says, "scuze me, sorryyy" over and over while she is trampled on. My heart breaks! I always have to step in too to make sure she is okay and gets a turn and whatever else.. I can relate to this story.