The Curse of the Apple Picker

Happy Monday! While Sarah is living it up on vacation, she asked me if I would travel on over to her blog today and leave a post. Since I am not on vacation this week (nor any other week this summer, for that matter), I jumped at the chance to visit the Trenches. Here's a little peek into my life...Feel free to visit me at boogers and burps anytime. You don't even have to knock, and you can help yourself to whatever you can find in the fridge. (Be sure to sniff the milk first, though.) --Paula
***

They say lightning never strikes twice in the same place. Obviously "they" have never been to my parents' farm.

Saturday morning Boy #1, Boy #2, Husband, Dog, and I all squeezed into the rental car with the New Mexico "Native American" plates (Yes, we still have the rental car!) and headed south. Destination? My parents' farm, an hour away.

My cousin and her family were visiting from Arizona, and I was so excited to spend the day gabbing and watching all the cousins interact. My cousin and her husband have 5 children, 4 boys ages 13, 10, 6, and 5, and then little Maren, who's 2. Add my 3 boys to the mix, and you've got a whole herd of boys, rarin' to get dirty and make some fun. (And one girl, who's likely to be found right in the middle of it all.)

Of course, the ride down wouldn't be complete without some backseat brawls. Since there were only two of them (Boy #3 had stayed with Grandma #1 for a few days and we were picking him up at Grandma #2's house.), I thought maybe they could get along for an hour. Seriously, what was I thinking? Had I ever ridden with my children before? I guess sometimes I slip from "realist" to "idealist." But I'm always quickly slammed back into reality.

This is a common battle at my house. The eldest loves to play the "It's mine!" card whenever he's in the mood to torture one of his siblings. True, most everything used to be his at one time, but since he thinks he's 10-going-on-17, most of the "kid toys" have long been shunned. That is, until one of his brothers claims it as his own... This usually results in tears from Boy #2 and a high-pitched scream from Boy #3. Good times.

Time for me to intervene. "Boy #2, you'd better give him back that toy. In fact, when we get home, I'm going to go through Boy #3's room and gather up his shape sorter, Sesame Street saxophone, and any TeleTubbies toy I can find because they used to be Boy #1's too. I'm going to put all of them in his room since he wants to play with them."

(No, I never use sarcasm with my kids. Ever.)

When my kids aren't fighting in the backseat, they are making the world's most annoying sounds, and I honestly don't know which is worse. Boy #1 likes to talk in this incredibly irritating baby-ish voice that my brain basically processes as "Da da duh ya wa wa tee hee wubuh dooooo." This makes his brothers laugh hysterically and his parents start twitching violently. Water torture? That's nothing. I'd like to see our enemies survive this silly baby voice. Oh, they'd be begging to talk!

Anyhoo, I'd better get this show on the road (ha ha)...So finally we pulled in to the farm. Hmmm, that's funny, I thought. I don't see my cousins' van. I figured they must've had to run to town for something. But I was soon informed that my mom and my cousin had taken Maren, the two-year-old lone girl, to the ER because she had fallen off the apple picker and may have broken her wrist.

Now, you're probably wondering what in the world the "apple picker" is. No, they weren't letting her play in one of those little buckets attached to a utility worker's truck that is used to fixed light poles. The apple picker is a piece of play equipment that my dad made for us when we were young. A "jungle gym", if you will. Here, let me show you. 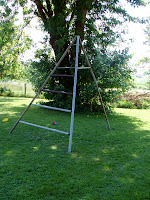 This was jungle gym #2 for us. The first one Dad made was more of a rectangular design, with a ladder and bars for climbing. No, we never had a "real" playset. Just Dad's creations made with pipes he found laying around the farm and a welding torch. No swings. No slides. Just ladders to climb and bars to hang on. But, hey, our swimming pool was a cattle water tank, so what do you expect?

The apple picker, so dubbed by our children because Grandpa would place it by an apple tree so they could climb and pick apples, had been serving children for 25+ years. It had even survived a tornado with only a bent leg as evidence of its ordeal.

And no one had ever gotten hurt.

So the boys played with their cousins and Husband and I caught up with my cousin's husband while we waited for word from the hospital. An hour later the patient arrived home with her wrist in a soft brace. The X-Ray didn't show a break, but the doctor wasn't confident that it still wasn't broken, so a radiologist would read the X-Ray on Monday and give them a call. Until then, she wasn't to put any pressure on it, which wasn't really a problem since she wouldn't let anyone go near it. Poor baby learned a new phrase after the doctor put the brace on her arm, which she repeated over and over again. "Off me!"

With the return of Mom and the cousins and the arrival of my pregnant sister and her two kids, the family reunion resumed. We ate. We talked. The kids played. On the apple picker...

Do you see where this is going?

"Mom! Mom!" my 5-year-old niece came running into the house. "Calhoun is hurt!"

My sister ran outside to see what was wrong with her 3-year-old daredevil and sure enough, there he was, laying on the ground...under the apple picker.

The same apple picker he had climbed probably a bajillion times before.

She brought him in the house and we knew it was bad because he was crying uncontrollably and holding his shin. This guy gets hurt all the time. I affectionately refer to him as a "tornado on two legs." And he barely cries. He cut his head open a month earlier and had to go to the ER. He cried for a minute or two and then was fine.

After unsuccessfully trying to coax him to try to walk on his leg and feeling a definite goose-egg on the front of his shin, we decided to take him to the hospital.

I offered to drive my sister and nephew instead of my mom. We didn't think it would look good for her to arrive back at the ER with yet another hurt child less than two hours later. They are mandatory reporters, you know...

My brother-in-law met us at the hospital, and I waited in the waiting room while they examined the poor baby. Normally, I would've entertained myself for this hour by eavesdropping on all of the other injured and sick people and wondering what had happened to them. Well, considering this was a small-town ER and not Chicago General, there was no one else to watch. NO ONE. Even the receptionist left her desk for who-knows-where. Not nearly the drama I was hoping for. Finally, however, my BIL came back through the double "emergency" doors and gave me the verdict: his fibula was broken all the way through. They were going to take him by ambulance to Des Moines to have a pediatric specialist decide how to treat it.

So, I went back to the farm and relayed the message to the rest of the family. If you can believe it, two hurt kids KIND OF put a damper on the whole family-reunion thing. The boys still had fun (playing chess, making bows out of willow branches and fishing line, and discovering a snapping turtle) and we still all visited, but it just wasn't quite as festive knowing that little Calhoun-y was riding in a big ambulance with a morphine drip attached to his arm.

About 8:30 that night, in walked my sister carrying a little boy with a blue cast from his foot to the middle of his thigh. He was able to smile and even wanted to put on the super-hero cape I had just given him that morning as a birthday present. (Unfortunately, he was not wearing the super-hero cape when he jumped off the apple picker.)

Apparently when they arrived at the DM hospital, the nurses were trying to put him at ease by visiting with him, so they asked, "How did you get here?", I'm sure expecting to hear him say, "In a truck with lights" or attempt the word "ambulance." Instead he looked at them with sad eyes and said, "By gwound twansport."

Needless to say, it was a crazy day, and the apple picker was the butt of many-a-joke.

What are the odds, though, that after 25 years, only two children had ever gotten hurt...and they were on the same day?

...And neither one was one of my kids?

Yeah, I don't know how we dodged that bullet either. But just to be safe, the kids won't be going within a 50-foot radius of the apple picker for quite a while... 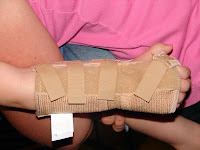 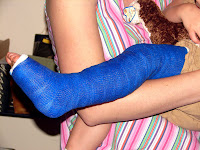 My first thought was "geez, I hope her mom doesn't go back to the emergency room." Poor babies!

Yup, my 5yo broke his leg at 19 mos slipping in the dog water he'd just knocked over. My 3yo fell down the stairs a week before his 2nd bday resulting in stitches above his right eye.

We wait for those mandated reporters...


At first glance I thought you had typed that the first fight was between boy and grandma #1-I was like, what?!???

I know you're all crazy but that would have been a new one. ;)

Something must be going around. These are the 5th and 6th kids I have heard about with broken bones this week! And it's only Monday!

The poor things. I hope the pain isn't to bad and they all heal quickly!