Baby had a boo boo,
Father played ball with Eldest,
Baby needed a band-aid,
So Middle had to wait.

First he banged the window,
Then he whined some more,
Then he dropped his brother's toy cars
On the kitchen floor.

Baby had gotten filthy,
Mother played cards with Eldest.
Baby needed drying off,
So Middle had to wait.

First he knocked some couch pillows,
Then he felled some chairs,
Then he took his brother's blankie
And threw it down the stairs.

Baby was getting sleepy,
Father watched Sox with Eldest.
Baby needed alphabet singing to,
So Middle had to wait.

And they didn't hear a sound,
But a "mwah ha ha" from Baby.

"He's left us!" moaned his mother
As they sifted through the trash.

"But I'm back again!" said Middle

(With profuse apologies to Rosemary Wells for butchering her children's classic, Noisy Nora. I think it's such a spectacular ode to a middle child.)

I can't imagine our Trenches without this character, for he's my Clown, my Songbird, my Crabapple, my Puzzle Man, my Couch Potato, my Patience Tester, my Soccer Boy, my Thumb Sucker/Blanket Lover, my Whiner. Yet at all times, my Joy. 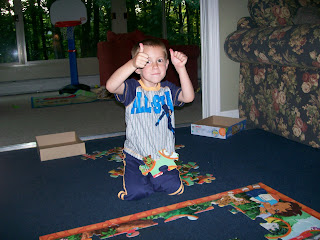 Love it! Happy Birthday, Middle! I can so see my middle in the antics of yours. Especially the whining. Oh, the whining. Enjoy this special day!

Happy birthday, kiddo! Four is lots of fun - my guy will be four next month, and he tells me that means he will be Big.

Sarah this is so cute!! Happy Birthday Middle!

Happy Birthday to your little man!

Happy Birthday Middle Man. You're the coolest... in my boys books.

Oh, this is just perfect. I LOVE that book and I love your version too. Happy birthay to Middle!

I also want to wish your middle a happy bday. I'm new to your blog and am enjoying your writing. I like in your previous entry where you talk about running to the beat of your music. I can run forever as long as I have my music. No music, no running.

I love what you wrote here Sarah! :) I'm smiling from ear to ear.

I never thought I would be able to connect to a boy, until I had my son. Now I can honestly say you are truly blessed to have 3 wonderful boys!

Happy Birthday to your son! My oldest turned 12 yesterday too! Am enjoying your blog.