Since you know there's always a story--wanna hear how my camera broke on the VERY FIRST DAY of vacation?

Since we had woken the boyz at 3am for our 5:30 flight on Saturday morning, all 3 of them took great naps at noon. After that we hit the beach and then schlepped back to the pool. Hubby's parents wanted to dine out, so it was just us and the kids. We returned from the pool around 7pm, dripping wet and starving.

The key wouldn't work in the lock.

Hubby had mistakenly grabbed the supply closet key instead of the door key.

We had no cell phone.

His parents were gone with the rental car.

The boyz all had to pee.

I had to poop.

Baby simply took matters into his own hands and announced, "I peeing", as we watched it trickle out of his bathing suit and down his leg onto the locked doorstep.

I refrained from doing the same.

So Hubby decided to take Eldest with him across the street to the rental unit office to see if perhaps they had a spare key. (Did I mention that it was 7pm on a Saturday? Do ya think the office would be open?)

Let me now set the scene for you: There's Middle. Standing at the door to the condo, doing the pee-pee dance. And then there's me. Scrambling like a crazy woman after Baby, who is now scurrying UP a flight of stairs because he's pissed that he wasn't allowed to go with Daddy.

The quicker I ran to try to grab him, the faster he scampered. Meanwhile, Middle is now completely out of my sight, standing ALONE at the door.

I must have been a sight, lemme tell ya. Still wet from the pool, barefoot, crazy frizzy hair, screeching at my almost-3-year-old WHO SHOULD KNOW BETTER to STOP!

Did I mention that I had to poop?

And that while I was chasing Baby, I had my camera around my wrist?

And that as I was yelling at Baby, I was intermittently calling down 2 flights of stairs to Middle to reassure him that we were indeed coming down, that he just needed to STAY THERE?

Well, when I finally caught Baby by the arm (who by then apparently thought Mommy must have been playing a game with him because he was alllllllll smiles), the strap on my camera broke and it went flying to the ground with a sickening thud.

So then, after I (roughly) hauled Baby back to the condo, Hubby and Eldest returned. No luck. The condo office was indeed closed. Shocker, that one.

Hubby decided to return to the pool to see if he could borrow someone's cell phone to call his parents so they could return home to let us in with their key. I made him take Baby with him for this trek back to the pool because I was so pissed about my broken camera.

Thankfully, the in-laws were done with their dinner and were already on their way back anyway when Hubby called.

So that was how our first day of vacation ended.

With a broken camera.

Oh, and I artfully managed to step in Baby's puddle 'o pee as I dashed to the toilet. 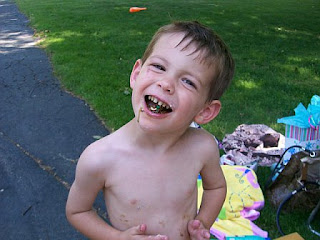 Don't let the cute monkey face fool you. This here is Trouble with capital T.

That stinks about the broken camera, especially on day one of vacation. (but your story made me laugh out loud!) :)

That's too bad about your camera but makes a great story to tell the 3 year old when he is 13....

Ohh, that sounds like a vacation I would have - except I only have 1 child!

Oh, how I missed you while you were on vacation! Reading your adventures makes me remember, once again, that I AM NOT ALONE! Everything nice I've ever owned has now been destroyed by one of my three boys. I think you should think about switching to disposable cameras for a while...at least until Baby is in middle school.

Oh, btw, I also appreciate the fact that you're not ashamed to admit that you have to poop. :)

Sorry to read about your camera!
I agree though, great story to tell later!

According to ebay, looks like a pretty good deal on the camera.

i think i am just ahead of you in the exact same life! well i have 4 kids and live in turkey, but other than that your stories sound eerily similar!

I'm so sorry about the camera and the vacation photos that never were, but OMG that story almost made ME pee!!

Well.. at least it was only an Easyshare. You could have dropped a Rebel G into an alligator swamp. :)

OH my GOSH, unreal. Yeah, I felt like I was there, watching, snickering. Sorry, it was kinda funny. It is SO typical though, you know? You are only EVER gonna get locked out, when you have to go to the bathroom. It's like law or something.