Remember this entry from 4/23?

The new carpeting has been installed. The bunk beds were disassembled. Baby and Middle are all set up in their "new" room in twin beds (and meanwhile, Eldest is THRILLED to be in his very own room in a twin bed of his own.)

So...I'll let ya guess. How did Baby's first night go?

A. Swimmingly. He and Middle went to bed quietly at 8:30 without any fuss.

B. Horrible. Baby cried and cried and wanted his crib.

C. Okay. There was some fooling around between Middle and Baby after lights out due to the novelty of the new arrangement, but eventually they settled down.

What do you think? 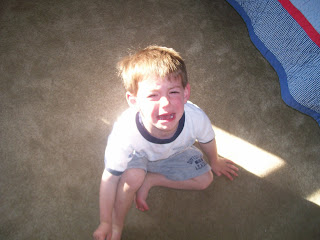 Well, the answer was, and still is-----B. Every night after we tuck him in, he cries down to us, between hysteria, wails and hiccups, "I neeeeeeeed you." We totally weren't expecting this reaction from him. It wasn't even on our radar.

So, every night we have The Drama. Baby sobs and sobs. Hubby and I have to go upstairs multiple times to settle him down. He's keeping Middle awake as well. (Thankfully both of them do stay in their beds.)

Last night I was alone, as Hubby was at a work dinner. I ended up laying in the bed with Baby (I know--not the best idea but I was at wit's end after 30 minutes of Drama.) Neither of them settled down until after 9:15pm. And I missed American Idol!

The Drama is causing a vicious cycle. They go to bed late. They wake early (by 7am) and are still tired (and cranky to boot). Then they both end up taking whopper naps in the afternoons (sometimes 3 hours). So when we try to put them down at 8pm, they're obviously not tired.

I realize the naptimes need to be limited--no more than 2 hours. And I think we need to just keep doing what we're doing until Baby adjusts. I don't want to start any bad habits (like laying in bed with him like I did last night.)

But Hubby thinks that maybe having Middle and Baby share a room isn't such a good idea--that we should go back to having Eldest and Middle share, when there was peace and tranquility and SLEEP in the Trenches.

I've got two boys that have shared a room for years... if yours are anything like mine, I'm picking C.

I'm going to guess C. If he was in a room by himself I would guess B, but since he had his brother with him, I think he did okay.

Why do I feel there should be an option D in there somewhere?

I hope it works out, we are doing the same thing this summer with the oldest.

I'm with the majority here. I say C.

Our oldest just got his own room and he was excited until he found out he had to clean it all by himself.

Baby is moving into a big girl bed soon. I'm delaying this as long as possible, because I'm afraid of another option.

D: Where she constantly gets out of bed and comes down the hall to my room instead of staying in her own bed.

Had you given that as an option, it would have been my pick!

I'm going to go with the majority here and say "C."

I shared a room with my older sister and then with my little sister (hooray for being the third of four) and I can attest to the fact that it will get better - the tomfoolery only lasts while the concept is still exciting. And it gets to be NOT exciting fast. :)

Sorry you are having a rough time with the new sleep situation. We get stuck in that same cycle a lot-no fun for anyone!

Makes you want to move out doesn't it?
My little girl is going through the "please sit with me and hold my hand for a minute" phase. Half an hour later I'm still there with a sore bum and heavy eyes!

Yikes. I'm so sorry I was wrong with my guess. I was hoping it wasn't B!

Okay, I have now decided to wait to move baby into her toddler bed. I am not ready for this to be a possibility. She has only been sleeping through the night for a little while.