Grandma Theresa never ever said "goodbye". She always said "so long" because it was her way of saying that we would see her again.

We laid Grandma Theresa to rest today. The funeral was quite lovely and a fitting tribute to the graceful matriarch of Hubby's side of the family. We let Eldest come with us to the funeral, then after the cemetery part, went back home and picked up Middle and Baby so they could come to the luncheon afterwards to entertain everyone with their antics.

How do you explain death to small children? We told the 3 of them that Grandma Theresa had died and was now up in heaven. Middle wanted to know when she'd be back. Then today, as the pallbearers (Hubby was a pallbearer) were loading the casket into the hearse (Eldest: "Wow Ma! Lookit that cool looking car"), Eldest wanted to know if it was her bones in the casket. When I told him no, it was her body, he then was confused because we had SAID she was in heaven. So then I told him that her body was still here on earth and was going to be buried in the ground at the cemetery, but that her SOUL was up in heaven. So then he asked, "What's a soul?" *sigh*

We were home by 2:30. And to take advantage of being home for the day....guess what fun activity we did as a family????

YARDWORK! And Grandma Theresa was surely smiling down on us as the sun shone, the wind blew and the snot dripped.

So long, Grandma Theresa. So long. 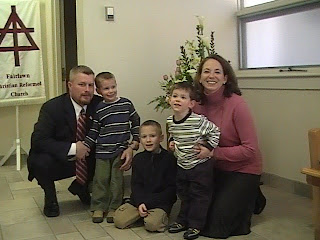 (Who takes family pictures at a funeral? We do.)

I'm sorry to hear about your loss.

When the girls great-grandmother died, we explained it like this:

We told them that her body was like a shell and that was the part being buried. Her soul is the part inside that you cannot see, yet its what made her who she was. That part was up in Heaven. They seemed to be able to understand it like that, since they could relate to it.

Death is a difficult concept to grasp no matter what age you are.
Sorry for your family's loss.

It sounds like an emotionally exhausting day. It's so hard to say goodbye to someone, even when they've had 106 years.

Loss is such a hard thing to explain. Good luck, I suspect Grandma Theresa will have a fun time watching the summertime shenanigans from her perch.

So long and Godspeed, Grandma Theresa.

I'm so sorry for your family's loss. May she rest in peace.

So sorry for your loss. It's one I anticipate here soon, as well, as my grandmother is 95 and in a nursing home. Describing death, when we're so uncertain of it ourselves, is truly a daunting task. You captured that well.

So sorry to hear about your husband's grandmother. I'm sure she'll be missed.

So sorry for your lost. I love that she always said "So long." Sounds like a wonderful women. I have a hard time explaining heaven to the kiddos too. You did a great job.

I'm sorry to hear about Grandma Theresa. We haven't lost a family member since the kids were old enough to understand. I don't know what I would say. I hope you find the words.

I'm sorry again, but you are a brave mom getting through that conversation.

I am sorry for your loss.

And we took a family picture at my Grandma's funeral too.

It sounds like she had a wonderful family and life. Your explanation to your son was appropriate and I’m glad the family was able to spend some together time celebrating her life.

love that she always said so long :) my grandpa said something similar...

as for the family picture at the funeral - at least your family doesn't take pictures of the person you are there saying goodbye to! seriously.

I'm sorry for your fam's loss.

Explaining death would be tough. Sounds like y'all did the best you could all things considered.

i am so sorry for your loss. what a matriarch she was! she certainly left quite a legacy and will no doubt live on.

i love the picture. it's funny how you mentioned taking pictures at funerals.... when my grandfather died last fall, i was so tempted to take my camera with me b/c my family was together and all dressed up.. i didn't but i regret it. good for you.

I am so sorry. We just had the same conversation with our boys two months ago. We also took family pictures at the funeral.