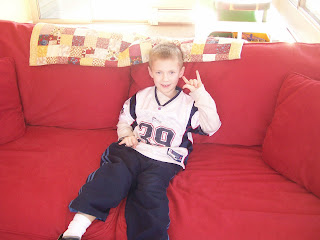 As Eldest was enjoying his snack of pretzel sticks and goldfish, he said to me, "Look Mom! I can pick up the goldfish like Chinese food, by using the pretzels as pork chops."

Puzzled, I had to pause for a second to try to comprehend. "Oh, do you mean chop sticks?"

*******************************
Lately, Eldest had been constantly playing with a crappy Game Boy handed down from his older cousin. The screen on it was so faded that in order to see it, he had to sit directly under a light, hold it at just the right angle, and still squint. Feeling guilty that he may possibly go blind before age 7, Hubby and I caved and just bought him a Nintendo DS. He loves it. And better yet, it's great for bribery. He's got 3 games right now (a backyard football one, a motorcross racing one, and a Hotwheels one). Any other suggestions for Nintendo DS games for a 6 year old?

Which led us to a discussion with him that "damn" is not a nice word and he shouldn't say it. He, in turn, inquired why it's pronounced "dam" when there's an N on the end. So all the rest of that day, I would randomly overhead him muttering "Dammmmmmm-neh."

Thanks a bunch, Comcast Cable.
Posted by Sarahviz at Wednesday, March 12, 2008

We lovelovelovelove the Lego Star Wars games for the DS. HUGE Star Wars boys in our house. We also have a Harry Potter game and some Garfield one, but by far our fave is Star Wars.

DO NOT get Pokemon games! I repeat: DO NOT!!! We haven't advanced to the DS yet, but my 6YO is OCD over some Pokemon games.

Our oldest has a crappy game boy and is currently saving money up for a DS. She's about 1/2 way there.

For games, I recommend LEGO Star Wars, any Pokemon, New Super Mario Bros., or Harvest Moon. My six year old loves them and they are enough to give her a challenge but not tough enough that she can't get through them with a little work.

All three of our GIRLS love Mario Cart!

Oh he sounds too cute! Dam-neh!

We are still in GameBoy-land. Although, if DS has the Star Wars trilogy game, Drew can't get enough of it lately.

Ha!
Briar says to me the other day, "Hey Mom? When Daddy paints does he sometimes drop a little bit of paint?"

She responded sagely, "And then he says 'Fuck', right?"

After a brief choking episode I said, "As a matter of fact he does, but, well, he shouldn't."


She pondered this, nodded and walked away.

I just asked Bulldog for his recommendation on games. He says..

"Pokemon. But he would have to read a lot, so if he can't read a lot, he shouldn't get Pokemon".

"This mixed up character racing game"

I asked him what it was.

Bulldog just added that "Animal Crossing" is a good game.

MarioKart, Lego Starwars, and the Mario Bros Game. If they can read, Animal Crossing is good too.