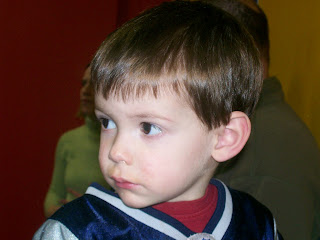 I woke up 2 weekends ago feeling extremely masochistic optimistic and decided that I would start the hellish and tortuous process of potty-training Baby. He and I took a special trip to Wal-Fart to pick out his very own potty seat and big-boy unders. (We already have a step stool and Elmo potty seat cover, but logistically, he and his wee wee are just too short. He has a GREAT personality though.)

So the deal was, if he peed on the potty, he and his big brothers would get 5 Starburst jellybeans each because I wanted the rest of the bag for myself. Nothing like a little peer pressure to get the juices urine flowing, huh?

Well, long story short...not so much.

Conclusion: At 2 years, 9 months, he's soooo not ready (even though both his brothers were trained before age 3). And I'm sick of cleaning the carpet. And I've been changing diapers for what? Almost 6-1/2 years now? What's a few more years months?

For example, last Saturday I was up in Eldest's and Middle's room, picking up. Baby was in there with me. He accidentally knocked over a plastic cup full of Eldest's coveted "skipping rocks" that he had (in true Rainman-like fashion) collected last summer at the Cape. No big deal. I simply informed him that he had to clean them up. Well, you would've thought that I asked him to give Diego or Boots a hug or something. The stubborn little punk was NOT going to clean them up.

So the deal was he had to pick up the rocks and put them back in the cup before he could come out of the room. It was a monumental battle of wills that lasted well over 30 minutes, with Baby sobbing the entire time and intermittently opening and then slamming shut the bedroom door.

Meanwhile, I? Was in my happy place as I gleefully managed to clean the entire master bathroom without interruption. And in the end? He picked up all the rocks. Score one for Mommy hangin' tough.

My baby is going to be 3 in two weeks. And he keeps saying that he wants me to change his diaper for "all of the days".
I hate potty training. Hate it!

LOL... I'm afraid of having another one, because this one is like my husband and I know the next one will be like me. I also fear potty training.

Son is just now finally potty-trained, at 3 1/2. I thought the day would never come.

Good for you winning the battle of wills. I usually give in-which is why G is such a brat... ;)

I think he and my baby are a LOT alike!!! She is a stubborn little turd!!!! She is opinionated (in her limited dialogue), she knows what she wants, and did I mention STUBBORN!!!!

Bubba was potty trained in less than a month and fully out of diapers in 3 months. He was just really good at catching on. I have a feeling baby will NOT be this easy. She's only 19 months, but I figure we'll be starting the discussion in another 6 months or so.

Baby is playing in the dog water. sigh.

Potty training is hell. They are the ones learning to use the potty so why is it so much work for us. My son is finally starting to use the potty more often than not because he is really into Spiderman right now and I told him that Spiderman only uses the potty and wears big boy underwear. Soemthing in that statement made my son think because there was a definite change in his behavior. But as for #2 on the toilet...forget about it! A few toots is all he is good for. The only thing I can chalk it up to is that they are men...okay, not men quite yet, but they have the gene, which is why they are so slow to potty train. My son now tells us to pause Tivo so that he can run and go to the bathroom and not miss anything...yeah, that's a man gene if I ever heard it!