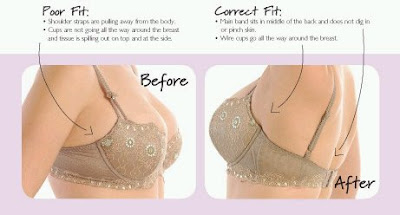 As I was walking in downtown Boston this afternoon, I saw a woman walking down the street with...shall we say, to put it nicely...an ill-fitting bra.

It literally looked like she had 4 boobs because the tops of her titties were NOT contained and were thus overflowing, causing there to be a dividing line where her bra ended and the rest of her boobs began their boycott.

Not pretty, people. Not pretty.

And yes, I totally stared. Hey, it didn't help that her sweater was turquoise blue.

Back to your regularly scheduled programming.
Posted by Sarahviz at Tuesday, March 04, 2008

Oof. Guilty. Well, not of wearing a bright blue sweater but very guilty of having gained weight and not gained a bra in a bigger size. Thanks for pointing that out... you know, before I show up in some sort of Glamour Don't.

I was hoping it wasn't noticeable because trying to find time to go bra shopping in the midst of a cross-country move? About as likely as me planning out my Weight Watchers points for the day.

I cannot bear to brave the intimates section of any of our local department stores, thus I am forced to endure the ill-fittingness of my bras as I enter what can only be described as the whale trimester of pregnancy...well endowed whale, that is.

Bwahahahahahah!!! I work with a lady that does this on a DAILY basis. After about six months, I told her about Oprah's show on how 75% of American women are wearing the wrong bra. She DVR'd it the next time it came on and after Christmas this year, 2 of her boobs disappeared. It was amazing.

Eww..I can't stand that. I actually have to go get some new bras this weekend, but my problem is the opposite-I am losing weight and boobs!

I am guilty of not being fashion conscious. However. I do make sure all flab and extra flesh is well contained and concealed.

I do it out of kindess for the general public. NOBODY needs to see that.

I'm guilty of the uni-boob. Sometimes when all your regular bras are dirty you *have* to go with the strapless tube bra. And when that one's dirty I wear the nipple-less strapless tube bra I bought for double-breast-pumping.

Ha ha ha ha. I just came across your blog {via the uber hilarious bloggess} and your isn't too shabby either. So funny.

My moms group is going to a department store for bra fittings next week.

Oh my god, what a great idea for an outing, Alex!

I need new bras. Thankfully I'm not spilling out of mine. Well, not thankfully, really. It's kind of sad to lose the nursing boobs. They were bountiful.