Guess whose father is having hip replacement surgery this week at 80 60 years of age?

Guess whose Sis is having surgery to remove a basal cell carcinoma on her face next week?

(I kinda feel left out of all this family surgery fun. Apparently I should have scheduled my boob job and tummy tuck this month.)

Guess who recently discovered (and is now addicted to) Jon & Kate + 8? (Strangely, I quite like Kate. And some most of Jon's comments are things Hubby would, and does, say.)

Guess whose Major Life Decision #2 was decided? (Some of you guessed it was regarding career and you were right. Everything is going to remain status quo. Not a bad thing.)

Guess whose latest crush is Nigel Barker? That is, until the new season of Entourage starts (mmmm....Vinny Chase).

Guess who started running again last week? Oh, and guess who has eaten her weight in Easter candy? (thus negating the exercise)

Guess who is still obsessed with this Pottery Barn duvet (queen size, please) and calls all the PB Outlets in the continental U.S. once a week to see if they have any in stock?

Guess who had a fabulous Girls Day shopping at the outlets with these chicks? (We missed you Jod! We joked that we would easily have NOT spent so much money if you had been there, hustling our butts to move along!)

And guess what we got to see this morning??? 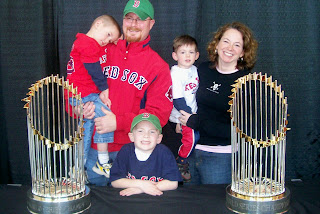 Not a bad weekend in, and out, of the Trenches!
Posted by Sarahviz at Saturday, March 29, 2008

Thanks for all the updates! I'll think good thoughts for your sister and father. Oddly, my own surgery is next Friday. So I fit in quite nicely with your family, LOL!

Sorry about the Great Pottery Barn Chase. I know how that is, when an item takes hold of you, and you can't let it go. :(

I am so looking forward to your running updates!

Wow. You are definitely full of news. My prayers are with your dad and sister. Contrary to popular belief (haha), surgery is NOT fun!! Gotta love some Nigel. I would love to have a photo shoot with him. Love the family picture! Even though I am a Yanks fan, I can appreciate your love of baseball & the Red Sox (my dad is from Boston & a Sox fan). Best wishes for a good week in the Trenches!

Hope all the surgeries go well! And I seriously love Jon and Kate Plus 8 too! Jon reminds me of my husband and Kate seems so normal. I couldn't be married to her but I wouldn't mind hanging out with her. And I hate to admit it but sometimes when she handles 8 kids so calmly it actually inspires me to be more calm and patient with my 2.

There are 2 of those duvet covers on e-bay right now.