Nothing Lasts For Long 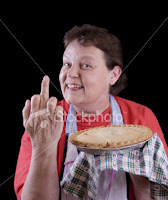 That elusive sense of peace, harmony and well-being is certainly fleeting here In the Trenches.

Yesterday was a family day at home because of the Monday holiday (thanks Chris Columbus!). We had a playdate in the morning so while I was in the house with the boyz and our guests, Hubby was able to channel his inner Paul Bunyon to chop down some trees in our backyard (Phase I of "Operation Landscape--Finally Preparing the Backyard For a Frickin' Swingset").

Hot lunch was served (hey, chicken nuggets count!) and then it was naptime! (Hear the angels singing?!) Hubby put the boyz to bed and went back outside with Eldest. I hunkered down on the couch for some Entourage...

I said I didn't feel like cooking dinner. An executive decision was made that Moe was making supper. The neighbor girls were over visiting with the boyz, so we asked them to join us. (Have I told you about our awesome neighbors? They have 3 girls--ages 15, 13 and 10. My built-in babysitters!)

So both families went to dinner. The boyz were (shockingly) well-behaved and chowed down on their quesadillas with gusto. The drive home was pleasant as we all sung along to Plain White T's "Hey There Delilah".

We returned to the Trenches. Chaos ensued.

Middle and Eldest fought over a puzzle.

Baby was crying because he wanted Middle's yellow Matchbox car that Middle was holding just out of his reach (on purpose).

Hubby was becoming more and more aggravated as he was attempting to herd all 3 upstairs for bathtime.

I needed to run the vacuum downstairs (so my babysitter won't think we live in filth).

And poof, just like that, the relative serenity of the day was drowned in a quagmire of crying, shouting and whining.

[Does this sound familiar? Puh-leeze tell me I'm not the only one...]
Posted by Sarahviz at Tuesday, October 09, 2007

You are not the only one!!! My three girls wake up bickering...makes me crazy!!!!!
And FYI...our swing set was the BEST money we ever spent!!!! And we went cheap on the playset and went a bit wild on the playhouse, which they are NEVER in!

Oh NO, that NEVER happens here. The boys always tuck their napkins under their chins at dinner, dab the corners of their mouths, and when the dishes have been rinsed and put in the dishwasher, they willingly skip to the bathtub where they happily have their hair washed, dried off, then read independently for 30 minutes before tucking themselves into bed (prayers and kisses included).

about her terrible, horrible, no good, very bad day. you'll feel much better about yours!!

p.s. sorry to hear your peace was broken! :)

Isn't it funny (not) how quickly that can happen.

clearly, you've read about my past few days.

The way a day is going can change on a dime when there are kids in the mix, I've found.

Oh, yeah, you are so the only one that happens to. The others are just being nice.

The only part that doesn't sound like my house is that there was any relative serenity at any time.

You mean this isn't normal in all households???

Not alone. Alone would be quiet. And clean. So not alone.

Sometimes things change here so quickly I feel like I'm getting whiplash!

Not only does that sound familiar... that was my house tonight. I'm finally on the couch. Chocolate chip cookie in hand. Wine to my right. And I'm ready to fall into Boston Legal. Let me just add one thing, oldest son decided it would be funny to pee all over the bathroom tonight.
- Audrey
P.S. - YOU ROCK!! Congrats on the 1/2 Marathon!!
P.P.S. - Head over to our Mama Loves Giveaways on our site www.pinksandblues.com. We're doing a giveaway in honor of Breast Cancer Awareness month and we're trying to get 500 women to pledge to get examined within the next year. Spread the word!! :)

oh yes, always. i could have the best day and 2 minutes before hubby gets home it all goes to pot.

I know this scene....all too well

Funny. I have a post that I've been working on about how most days lately have been rather calm, but the evenings have turned into utter chaos filled with lots of screaming (mine and my son's.)

So no, you are NOT alone.

You are not the only one. You have just described my days.

isn't that the way it always goes? at least in public, this time, they were well behaved...at least. it's always those moments right before bath and bed that everything goes to pot. it's crazy and then bam, all's quite on the homefront.

nothing beats the feeling of all the kids asleep in bed. nothing.

I'm still stuck at Moe making dinner. Can I get me some of that? Do they deliver to PA?

Sounds like every. single. day. at my house. By 5 p.m., my shoulders are up around my ears, my jaw is clenched so tight it feels permanently stuck and I swear there is steam coming out my ears. The yelling. Oh, lordy, the yelling.

You're not alone!! Some days I realize that my windows are open and my neighbors must have a HORRIBLE impression of my mothering skills... Oh well. What can you do?

Oh, puh-leaze, that's nothing. I've had days where my throat was sore from yelling... BEFORE SCHOOL! So. You know. It happens.

I'm going to quote one of my all time fav bloggers.

Oh, the Joys...where every day is the same.

Um, isn't that a NORMAL day? Cuz it is here in these parts.

You are NOT the only one. Believe me.

Are you KIDDING? I am relieved to know I am not the only one.

It happens. That's what that clause is all about in your marriage vows, "better or WORSE". Both exist, the good and the bad. My days are always mixed. I feel good if I have more "better" than "worse". This includes interacting with DH or preshus kiddies.

Don't fret. Although we are not gauranteed a tomorrow, if we get one...it is always another day, and another shot.
(how many cliches can I fit in here?? Sorry.)