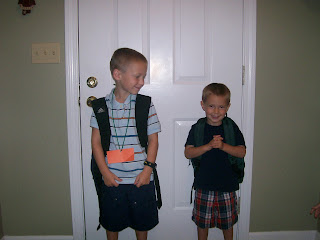 Middle started preschool today. 2 mornings a week. Could you hear my shouts of joy from where you are in the blogosphere?

He was so ready. As soon as we walked into his classroom, he confidently stated to me, "Ok Mommy. Bye."

And tonight at dinner, all we could drag out of him was that 1) the story at circle time was "Tiger Goes to School"; and 2) that he made NO new friends today (but he said this with a weird sense of 3 year old pride).

As for the lone survivor Baby, he didn't take the boyz' absence too well. He cried (just like he did all last week) when he realized he wasn't getting on the school bus with Eldest;

He cried because he wanted to wear his backpack;

He cried when he realized he wasn't getting into the car to go to preschool;

And then he shrieked (and I may have cursed) when we both realized that PBS changed their frigging TV lineup and Sesame Street wasn't on at 8 a.m. Of course I had to capture his misery the moment: Hang in there buddy. Just one more year until you get to be a Big Boy like your brothers!
Posted by Sarahviz at Tuesday, September 04, 2007

Poor baby. He can hang out with my little Amelia. She is feeling all left out too. She has a bad case of the me too blues. Today was my oldest first day of preschool too. What a day.

Awww, look how sad he looks! It's got to be an tough adjustment for him (his brothers going to school, not the Sesame Street schedule change)!

I love how Eldest is looking at Middle in that first picture... it's like he's saying, "Don't look so excited, kid. School isn't all it's cracked up to be."

And I just hate it when they go and change the tv schedule. Nothing like trying to explain why there show just isn't on when it's supposed to be.

What do you mean Sesame Street isn't on at 8 anymore? Are you just teasing? Are you being mean? Sarah...HELP! Say it isn't so. Gotta run, I have a DVR to readjust.

Glad you made it through the day :)

This is a great picture of your boys. I love how eldest is looking at his little brother. And I love the plaid shorts. I am all about plaid these days.

Poor little guy. I am glad that Clara is not old enough to realize she got left behind.

Poor Baby! At least you will get some snuggle time with just him :)

However one more year until you have some "you" time. I think that is the shriek that will be heard around the blogosphere.

What a beautiful, heart-wrenching post. Glad you've got the moment captured forever in words and photos!

Love the pics! We are lamenting here too. Why is Dragon Tales on when it's supposed to be Curious George?! Drat.

Aw, poor baby. That can't be easy for him. Especially the PBS lineup change. WTF? I hate it when they do that.

I'm alone with The Toddler now too, since both older kids are in for full days now. We spent the morning at a drop in playgroup where I learned that my baby has no sharing skills. What. So. Ever.

We left in shame.

Oh, he will start to love his time alone with you soon! Then he will be saying, "They are home already?"

Sesame Street comes on at 8 on PBS Sprout, do you have that channel?

Poor Baby! I bet that is really hard! Just think, one more kid in school and you'll be FREE!!!!

They want to grow up so fast.

Aw...I just want to give the little sweetie a big hug! He's so sweet!