Well, this entire summer has just FLOWN. And our week in Cape Cod was certainly no different. Sad to not be sitting on the beach from 9-5 like it's my job, but happy to finally have all the sand out of my girly parts.

Lots to do now, lots to do. Kindergarten starts next week for Eldest, Middle has preschool screening and Open House (he starts after Labor Day), Pop Warner football takes up 3-5 nights a week (don't EVEN get me started on that...) and my work is gonna get crazy as I will be responsible for training a new employee next week. Add to that a wedding in NH this weekend (one of my college roomies), trying to train for a half marathon (don't EVEN get me started on that either!), and a 5 mile race on Labor Day Monday in Boston. Ack. Thinking about all this (especially the running) made me just PIMMAL, you know, puke in my mouth a little (a cute little phrase I just stole from my gal Ashley.)

ANYWAY, while I was away, I was tagged by Betsy at Gray Matter Matters for a meme wherein I'm supposed to list 10 weird, random things or little known facts or habits about myself. But since I just got back and am a master multi-tasker, I'm doing this meme but am changing it to this:

10 LESSONS I LEARNED WHILE ON OUR FAMILY VACATION: 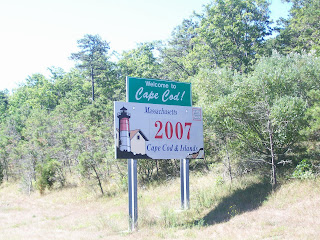 1. If you drink a plethora of Coronas with lime (and a pinch of salt) for consecutive nights, you may end up with a whopping cold sore by mid-week.

2. Leaving Baby without a swimmy diaper, even for less than a half hour, will GUARANTEE a smooshed turd in a bathing suit. In the middle of a sand bar in the middle of the ocean. Poop is biodegradable, right??

3. Middle had no shame when it came to emptying his bladder. He would walk down to the ocean's edge, whip his swimsuit down to his ankles, and pee. Didn't matter who was around or what was going on around him. And usually we didn't catch him until it was too late. We just pretended we didn't know who's disgusting child he was.

4. All lifeguards don't just sit and look pretty. The husbands took the 5 boyz out to a sand bar to skip rocks. See the sand bar up ahead of them in the pic? 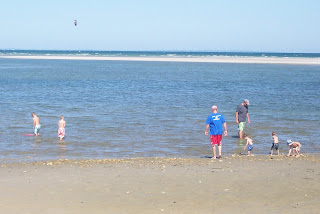 Well, what we didn't realize was that the tide was coming IN. By the time they started making their way back, it was over the kids' heads. Enter cute Lifeguard to the rescue! (much to the pleasure of the perverts husbands). 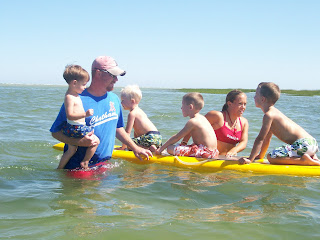 5. Eating and drinking with abandon while on vacation pretty much ensures at least a 5 pound weight gain. Which is so not good when you have to fit into a cocktail dress for a wedding the following weekend.

6. Packing running sneakers for your vacation doesn't necessarily translate into actually using them. See #1 and #5 above.

7. Always bring the stroller, if in doubt. On Friday, the weather was a little iffy in the morning, so we took a jaunt to the local playground. I was hung over lazy and didn't feel like hefting out the double jog stroller from the back of the car (Mistake #1). I figured that Middle would want to walk with the big boys (Mistake #2) and that in turn, Baby would do the same (Mistake #3). Instead, I ended up with a whining, crying, throwing-his-body-down-on-the-sidewalk Middle and carrying Baby for what seemed like 2 miles. Hey! That could count as my exercise right?

8. I love vacation houses with outdoor showers! Every afternoon upon our return from a hard day of work at the beach, I paraded the boyz, one at a time, into the outdoor shower with their father. It was like an assembly line. Strip, shower, towel dry, pj's on. Repeat. Repeat again.

9. The ocean air REALLY tires out a 2 year old. We thought we were going to have sleep issues with Baby. Our first night there, he discovered that he could climb out of his pack&play. But after moving him into our room (instead of with his 2 big brothers), he settled right down every night. AND he napped for at least 90 minutes in the stroller every day on the beach!

9a. So when we got home, we had sort of forgotten about the whole "climbing out" issue. After putting the boyz to bed, we had the baby monitor on, and I was unpacking, err...on the computer. And Baby was crying. Hubby and I had a battle of wills as to whom was going to respond. ("Go check on him." "No, you go." "Well, he's calling for you." "Yeah, but if I go, he won't settle down for me. He does for you." "But he's calling for you.") Eventually he settled down (it was only about 20 minutes). And remember, I was really busy unpacking, err...reading blogs. When we went up to bed at 11pm last night, Hubby discovered Baby curled up, asleep, in the middle of his bedroom floor. Poor buddy.

10. Every year does indeed get easier! This year, as opposed to our Cape vacation last year, we only had 1 pack&play, 1 child in diapers, 1 child requiring a daily nap. As for next year? None of that! 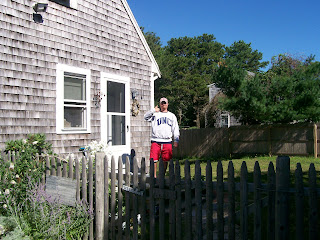 I would appreciate it if you could talk to your 2 yo about NOT texting my 2 yo that climbing out of a crib is possible.

I'd also appreciate it if he didn't IM him on this matter either.

Your vacation sounds lovely! We almost went to the Cape this year (maybe next!)---I agree on the outdoor shower---it is the best thing ever!

Oh I loved this post, and the glimpse it gave me into your vacation life. It sounds lovely. It is hard to go back to the chaos everyday life though isn't it.

Oh! That sounds like a perfect vacation. And the photos support my theory.

Sounds like you guys had a blast! In my opinion there is no better bathing option than an outdoor shower. And kudos on the 1/2 mara training - I'm signed up to do one in the end of Oct. but I think I'm pushing it back and going for the Rock n' Roll one in Phoenix in January - get a mini vacation out of it.

At the beach, outdoor showers rock, whether it is just to rinse off or for a full blown shower.

Sounds like you had a great vacation and kudos to yours and your husbands adventures in parenting.

Welcome back Sarah!!
Ahh... your post made me laugh!! I love the one about your middle son peeing in the beach water... I can SO see my middle guy doing that too!
I am trying to get our family to the Cape, even if just for a day trip! With the baby right now vacation is tough, but I am dying to just get away for a day or two!! You have inspired me to get a little day trip planned before the end of the summer - you know, in 10 days! LOL
- Audrey
Pinks & Blues

Your vacation sounds great. But I'm really bummed out because we're going to the Cape tomorrow. It would have been fun to meet up with you guys down there.

'Cause, we don't live close enough to each other, you know? ;)

Can I just say, in response to #10, that it only gets easier each year if you stop having children? That is oh-so-crystal-clear to me this year, as the older two amuse themselves for hours on vacation, while the toddler keeps eating her weight in sand and running into traffic.

Oh it looks so nice! Can you tell me where you stayed exactly - we are contemplating a trip to Boston and Cape Cod in the near future.

You can email me if you prefer.

I know you probably mentioned this before...but how did you get two more kids during your vacation?
#3. sometimes people never break that habit. My SIL still does that sometimes. On my vegas bachelorette party, she peed on the pillar at the Venetian. We had to run because security saw her and started making their way over to us.
#5 Tell me about it. I gained 4 lbs!! Too many buffets I think.