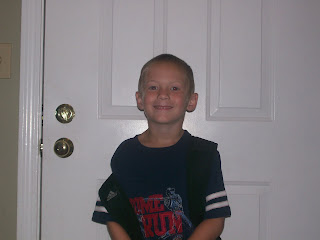 Time Eldest woke up this morning for his first day of Kindergarten: 6:15 (I know this because I saw him peering out the window as I returned to the Trenches from my ass crack of dawn morning run.

Number of times he changed his first-day-of-school outfits: 0. He's a boy! For this, I'm thankful. (Although he did pick out his outfits for the entire rest of the week already.)

Number of times I had to remind him to brush his teeth: at least 3.

Number of pictures I took this morning: 18. And Hubby videotaped as well. Total first-time parents of a kindergartener. I KNOW! 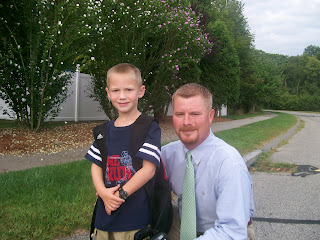 Number of hours he's actually in Kindergarten: 2.5. (I've refrained from venting blogging about this, as this was the first year that our town cut the kindergarten program from a full day to a half day. I'm bullshit pissed. Eldest is sooo ready for a full day of school, after having spent 2 years in preschool and having an October birthday, thus making him the oldest in his class. Plus, remember, he's Rainman.)

Number of bus steps Baby cleared before we whisked him down: 2. He thought HE was going to school this morning.

Number of "I can't believe he's actually starting kindergarten" thoughts that were in my head this morning: Too many to count.

BUT: Number of tears I shed as I watched my Eldest baby boy get on the big yellow bus to begin his school career: 0. 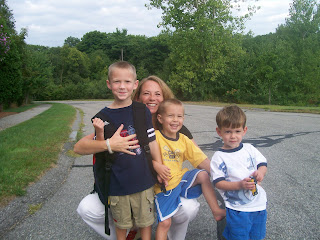 Congratulations!! What an exciting day, even if school only lasted for 2.5 hours.

Yay! Congrats to your big boy and to you of course.

perhaps his arm just got stuck under yours, but it looks like he's pumping his fist down in the univerals sign for "yes!!!!"

Congrats on your big boy, and the mommy who was ready. Good job.

Yay! For everyone concerned! Love the photos. He's going to rock kindergarten!

Next Tues. I send my last one off to kindergarten. It feels HUGE. And our K is full-day.

It's wonderful, and, for me, unbearably sad at the same time.

Does it count as a full day of Kindergarten if you don't pick him up till 3?

How great! I was tearing up reading this. The first day anticipation is so exciting!

Tracy Rambles On And On said...

I'm so proud of you for not crying! I did cry but I made it to the car before the tears started rolling so they never saw me. It's funny to me because on the first day of school here, I saw two mothers who were bawling and holding on to their children as if they were sending them to the gallows instead of kindergarten. I can't imagine what must have been going through those kids minds. Good job!

I will be right there with you next week as Mr. 5 heads off to a full day kindergarten-thank goodness!

Why am I reading blogs this week and seeing children heading off to school? Dude, it's still August. And where do I have to move to bump up the start of school date to, like, now?

He definitely looks ready for school. I hope he loves it.

Sucks that it's only half-day, though!

Great pictures, you have the most adorable family!

OMG...I can't believe how big he is already! Seems like just yesterday I was rocking him in your living room and changing his diaper when he was just a little peanut (remember my "morning wood" horror??? ha ha). I think I'll cry for the both of us.

IT's so exciting that even Baby wants to go. Love the picture!

Oh Sarah! That is awesome! Congrats congrats to your BIG BOY!!
I would be rip shit if they do that here for kindergarten. Like you, my oldest has a Sept. birthday and will be the oldest when he's ready to go.
UGH!
COngrats to you all - what a handsome boy - those girls better watch out! LOL!
- Audrey
p,s. - OH! And a playdate with the boys, I'm SO in!!

That is too stinking cute! You are such a good mama!

What an exciting day!
They grow up so fast. It is crazy mine will be two next month.

He is precious. The lawyer is doing kinder take 2 since he turned 5 right before school started last year. I think I would have a sit in if they cut the program in half. Seriously-I think I would go postal on their ass.

Oh you should be proud. What a cute kindergartner you have! I so would have cried.

Ahhhh, the first day of Kindergarten. What a wondrous, momentous, unforgettable thing. I hope he had a great day!

Your town went full-day to half-day!? That's insane. I thought the trend was the other way around. Half-day is just not practical anymore.

In any case, how cute is he? And very impressive that you managed to get a run in on his first day. Big ups.

Your boys are adorable.

how awesome is that...congratulations to you both :-)

How exciting...hopefully it's a great year for him.

Wow...what a big day! I hope I am as calm as you were...I picture myself blubbering all over Zander, and the getting on the bus with him!!!

Aww, what a milestone! Congratulations!

My youngest of my 3 boys will be starting full-day K on Tuesday!

I hope your son continues to enjoy it, and feel free to give him extra work at home! My oldest boy has always learned more at home than at school.