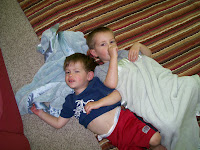 We had two complete freak-out meltdowns In the Trenches today. Middle and Baby.

My Sis invited me and the boyz to my Niece's play. She's been in theatre camp for the past two weeks, and today was their 12:30 production of "You're a Good Man, Charlie Brown".

Well, we got there early, and snagged FRONT ROW seats. Yay for us! Both Eldest and Middle are familiar with the Charlie Brown characters, so they were quite excited.

I, of course, had forgotten that Baby has never been to any sort of "show" before. Nope, no Elmo, Dora, Blue's Clues shows or any of that traveling crap that comes to town where you pay $50 a seat and then shell out that much again for the crappy merchandise. [Disclaimer: BUT, yes, we did do that when we just had Eldest. He's, of course, seen Sesame Street Live, the Wiggles, Dora, etc. Yet another big difference from the first to the third.]

Anyway, as soon as the camp director got onstage, Baby FREAKED OUT. Started wailing and saying over and over again, clear as day (the kid who doesn't talk, right?) "Buh-bye, buh-bye...ad nauseam. Loudly. While sitting in the FRONT row.

SO--the director STOPS mid-speech and says, "Uh, someone wants to go bye-bye." And then dead silence (crickets chirping, and one hysterical Baby). Like she's WAITING for me to do something. So I quickly got up, in front of everyone in the theatre and walked down a side aisle to the back with Baby. And then she resumed talking. It was like a blur (total humiliation will do that to ya) but I think I remember muttering to my Sis as I gathered up Baby, "I'm so mortified right now."

Anyway, I stood on the side in the back with Baby. Once the show started, he was entranced. So instead of our golden FRONT ROW seats, we enjoyed the production from a nice safe distance and all was well.

The only thing worse than the 15-minute catnap has got to be attempting to answer the question: "Is it too late for a nap?" This happened today. After the show, we stopped at McDonald's for a late lunch (2:00ish). By the time I dropped my Sis and Niece (and Eldest so he could stay and play with Niece) off, it was past 2:30, definitely way past our normally scheduled naptimes. When I dropped them all off, Middle incorrectly thought that he, too would be staying to play. No dice.

Me? I was doing the white knuckle grip on the steering wheel, trying to get home as soon as possible so I could THROW HIS ROTTEN ASS into bed. And? The worst part? My MOM (who is in MA for the summer) was in the third row of the back, gritting her teeth as well. There's nothing worse than feeling like you're a totally inadequate mother in front of your OWN mother.

Of course, looking back now, I know I did everything wrong. I counted to 3 (more than once), I made empty threats, I pleaded and begged, I ignored. All in a fricking 10 minute drive.

By the time we got home, he was pretty much calmed down. The kid is amazing in the fact that he can go from whining/crying/miserable to calm/cool/rational in 0.2 seconds. Like flipping a switch, I swear. He may very well be psycho.

Once we exited the car, I started playing head games with myself:

"If I don't put them down, it will be TORTUOUS until bedtime. Do I want to deal with that?"

"BUT, would I be cutting off my nose to spite my face if I try to give them naps now? Shouldn't I just suck it up so that I can throw them in bed by 7pm at the latest?"

In the meantime, my Mom was scrambling to gather her stuff so she could, in fact, head back to my Sis's in her own car. No way was she spending any more time around my hoodlums. Smart lady.

So guess what I did? I scurried next door, to where my babysitter lives (I know, I'm very lucky) and asked if she could watch the two little ones for perhaps an hour while I went for a run. And then I got the HELL out of there. And...I didn't mention to her that neither of them had napped. Because I knew that they would behave better for her than they would for me. And they did.

And yes, both Middle and Baby were tucked in for nighty-night BEFORE 7pm.

So, after our Freak-Out Friday, it is now all quiet and relaxed here In the Trenches. Happy weekend everyone!
Posted by Sarahviz at Friday, July 20, 2007

Freak out Friday was like reading my own words. So true except, for us, it happened yesterday. Have a great weekend!

Oh my God! What a day! I'm exhausted just reading all that. I hope you get some much needed rest tonight.

We had a pretty rotten day over here, too.

Something in the air?

I'm gonna have a drink and toast to you.

Your babysitter lives next door? Lucky dawg! If ours lived next door I wouldn't be able to afford the mortgage cuz I'd ask her to come over every day. Every. Damn. Day!

Glad things have cooled down for you

here's hoping you have a soothing saturday (miracles happen, right?)

sounds like quite a day. I hope you treated yourself to a large glass of wine once you'd got them into bed.

I am still working on your template by the way, just been busy as hell.

Oh, the "Freak Out Fridays". Fridays wouldn't be Fridays without them.

Okay so I was feeling for ya girl UNTIL you called the sitter and went for a run!!!!!!!!

I totally get those car meltdowns. I have to just mantra to myself in my head that she is buckled. She is safe. She is just screaming. To concentrate on my driving. I usually do not even do anything to try and calm her. I just focus on dricing safely.

These meltdown are so draining on my soul. I can't tell you. That and whining. I have little patience for. Like. No patience. HAHA.

I think your boys are rubbing off on mine. Please tell them to stop it!

As far as looking bad in front of your own mother...I know exactly how you feel!

EVERY single afternoon i go through that with the nap. I forget how old middle and baby are 3 and 2 ?

"He may very well be psycho."

Classic! I am sure every parent wonders that about her child once or twice.

the run was probably the best choice - got you out and the kids in bed early!

....I hope your weekend was better...Little A was awful yesterday; hope it isn't contagious.