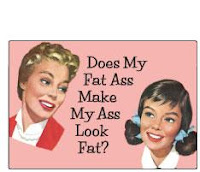 I worked late last night, so by the time I got home, the boyz were bathed and already in their pjs (yay!) and were watching the Red Sox preseason game. Eldest is soooo excited for baseball season to start. He and Hubby have a "boys night" tomorrow night. The Sox are playing at 6 and Dice-K is pitching. Eldest has been nagging me to wash his new Dice-K shirt (that we have to HIDE from him and throw in the laundry because he wants to wear it every day) so he can wear it to watch the game. I think we've created a monster. Think of Jimmy Fallon in Fever Pitch. Yup, that will be Eldest.

Anyway, as we were watching American Idol last night (more on that later), I got on the exercise bike and was all ready to go for a spin. I was lifting my 5lb weights (at the same time because I'm coordinated like that) and banged (it felt more like CRUSHED though) my hand into the weight rack behind me. So I immediately hopped OFF the bike (after a mere 3 minutes on) and took that as a sign that I wasn't meant to work out. But I had the INTENTION of doing a full workout, so that COUNTS, dammit. Please reference the ASS picture above.

So we're signing Eldest up for Pop Warner football. Practice starts in August. He'll do tee-ball this spring (for the first time) and then football in the fall. That is, if he makes the 37 lb. weight minimum by then...could you imagine me having to carbo-load my 5 year old to "make weight"?

Eldest, who as you know by now, is quite....ummmm....shall we say, quirky....has developed a new twitch. (I took him to the eyedoctor last year because he was doing this excessive blinking thing. His eyes were fine. And then he just stopped doing it). Now he's doing this nose scrunching thing when he talks. He'll say something, and then wrinkle his face and scrunch his nose. Sweet. I feel like the more we point it out, the more he thinks it's funny and the more he continues to do it.

We had the TV on Nickelodeon one night this week and Jimmy Neutron came on with a "Y7" rating. The rule is, Eldest is not allowed to watch anything "Y7". So Hubby pointed out, "Turn it, it's Y7" and Eldest responded, "Aww, they're just kidding. It's not really Y7." Like Nickelodeon is pulling a big joke on all parents or something....

Eldest and Middle were brushing their teeth before bed. Middle was having a meltdown because he couldn't get the toothpaste cap off (because you know when you're 2 that's something HUGE to cry over) and I watched as Eldest grabbed Middle by both shoulders and said into his face, "Just take a deep breath, wouldja?"

This is a long post. Stick with me folks!

So my picks for best and worst Oscar dresses--because even if you weren't crazy enough to stay up for them, you've seen all the recaps by now:

TOP 5: Reese Witherspoon (love her rockin' being a single mom); Helen Mirren (one word: classy); Jada Pinkett Smith (who else could wear that color and look fab?); Kate Winslet (I love that she's a mom whose not a frickin' toothpick); and Halle Barry (oh, she wasn't even there? Well, you know she'd be on everyone's top 5 if she was....)

I swear my co-workers have to know my menstrual cycle, because once a month, Sarah delights the office with donuts for breakfast and various chocolate candy goodies after lunch. I just get so hungry (meaning, junk food CRAVING) that I feel like I could eat my arm off. I resisted (both gnawing my arm off and) stopping at the store this morning, but luckily someone brought in mini cupcakes, of which I've only eaten 2 (so far...) Maybe I should try this diet?

And as for American Idol...why don't they just make it simple and kick off all the white girls right now?

My husband was at Game 4 of the World Series at Busch Stadium when the Red Sox beat the Cards. (We're Cards fans). I wasn't invited and am still mad to this day. I would have loved to have been a part of that moment, even if it wasn't for my team.