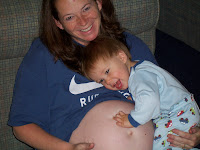 These are some of the differences between my three pregnancies:

1st: Forced myself to drink a glass of milk a day (for the well-being of my unborn child)
2nd: Drank milk when Hubby would make me feel guilty enough about NOT drinking milk
3rd: Milk? Blechhh. No way...I got my calcium through other means....plenty of ice cream!

1st: No caffeine at all
2nd: 1 can of soda a day
3rd: As much caffeine as it took to make it through the day with a 3 year old and a baby...I needed a caffeine drip in my arm at that point.

1st: Kept vigilant and accurate track of weight gain (and cried when I hit 150 and they had to move the big block on the scale from 100 to 150--you totally know what I mean!)
2nd: Was only made aware of my weight at each weigh-in at the doctor's office
3rd: Closed my eyes and covered my ears (earmuffs! la la la I can't hear you....) at each and every doctor appointment

1st: Kept a weekly photo album of my pregnancy belly
2nd: Sporadic pictures of the baby bump
3rd: It was pretty much "Come near me with a camera and I will kill you!" (except for what I consider to be my "Mother Earth" picture with Middle above) [Sidenote: That Nike tee-shirt I'm wearing actually has sentimental value. Hubby was wearing it on our first unofficial "date" (my friend and I met up with him at a pub on a weeknight) and I asked him after noticing the shirt said Nike Running, "Oh, do you run?" and he replied, "No, I just like the shirt."]

1st: Maternity clothes are soooooooo cute! I can't wait until they actually fit and aren't too big!
2nd: Ugh...I guess I should buy some new maternity clothes since I'm pregnant in a different season this time. But hey, it's important to feel like I look good.
3rd: I f'ing hate all these fat whale clothes. Didn't I just STOP wearing them? Oh, yeah, it was like 3 months ago, as a matter of fact. And what psycho MALE designer puts horizontal stripes on maternity clothing???

And then the boyz arrived one by one In the Trenches:

Eldest: C-section after "failure to progress". Normal c-section recovery that was made less
painful by the adrenaline rush of "Ohmygod we have a baby. We're parents. And look, he's sooo cute. And sooo good. This is sooo fun!"
Middle: Scheduled c-section. Except somehow Dr. Kevorkian ended up being my anesthesiologist. And couldn't find the INJECTION SITE for my spinal. 45 minutes and 10 needle pricks later, I'm finally numb enough to be sliced open. Ack.
Baby: Scheduled c-section. Turns out my uterus is pretty thin. So thin, in fact, that my OB NICKS MY BLADDER during surgery. And I get stuck with a catheter for a WEEK after having Baby. And thus have to come home from the hospital carrying Baby in one arm and my "yellow Gucci bag" on the other arm.

Eldest: Was breastfed for 6 months
Middle: Only lasted 3 weeks. Switched to Enfamil with Nutramigen for his colic. Oh, the colic.....
Baby: Breastfed for 6 weeks. Until a raging case of double mastitis that I had to nurse through with a temperature of almost 104. Yeah, that was enough for me.

Eldest: Had a super-size Lands End diaper bag that could seriously be used as a piece of carry-on luggage
Middle: Went the more streamlined, backpack route
Baby: If it doesn't fit in my purse, I'm not carrying it

Eldest: Wasn't introduced to solid foods until the requisite 6 months of age
Middle: Had baby cereal at 3 months old instead of 4 months old (I was such a rebel like that)
Baby: Was eating (well, gumming....) potato chips at 10 months

Eldest: Was never given any foods that were in the slightest bit warm for fear of burning his little baby tongue, much less given ketchup to try (way too messy for this new Momma)
Middle: Loves to "dip" in ketchup, ranch dressing, and/or sweet and sour sauce
Baby: Ketchup is a food group, right?

Eldest: Had his bum wiped with comforting diaper wipes from the electrical diaper wipe warmer
Middle: Was born in summer, so no such wipe-warmer needed
Baby: Pretty much only gets a diaper change if he smells funky or the diaper is noticeably hanging down to his knobby knees

Eldest: Took a weekly photo for 52 weeks to commemorate his first year of life
Middle: Tried to do a week-by-week album, but it's missing a few pics here and there
Baby: Ummm...

And forget about videotapes. Eldest's entire first 3 years of life are chronicled on video. And then we have the birth of Middle and the birth of Baby. And that's it for them. Can you say hefty therapy bills?

So can I have your vote at Top Momma? (even though after typing this I should be ashamed to ask. But I have a blog. Therefore, I have no shame.)
Posted by Sarahviz at Thursday, March 08, 2007

I'm definitely not as careful this go round...haven't really given a second thought to weight gain, drinking enough water, eating the right foods. maybe this baby will be a little more laid back?

Hey, I tagged you for a meme, check out my blog for info.

couldn't figure out how to vote.

I defiitely think youare one of the top mommy blogs i have read.