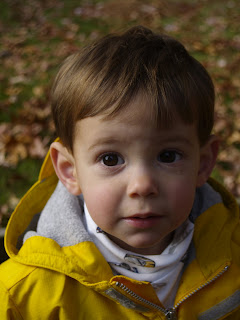 Baby had his "well-child" 18-month checkup on Friday. He was 5th percentile for weight (just over 20 pounds) and 15th percentile for height. My littlest peanut! (All 3 of them are SHRIMPY.) Poor little buddy was subjected to having 2 shots, 1 in each arm, and get this....HE DIDN'T EVEN CRY. The Dr. and both nurses were amazed. Apparently I have quite a "toughie" on my hands. I think having 2 big brothers has made Baby quite the brute! Although, I have to confess, he was quite distracted with the Dr.'s pens in his shirt pocket. He kept trying to grab them as the Dr. was sticking him and acted like the injections were more of a nuisance rather than actual pain.

Even more disconcerting than the 2 shots though, was the fact that even after having his 3rd (or was it 4th?) DOUBLE ear infection this winter, Baby's ears STILL weren't clear. So the good Dr. prescribed Bactrim (?), a preventative antibiotic for him to take for 4 weeks, in hopes that that would clear him up.

But that idea was all for naught, as Hubby was back at the Dr.'s office AGAIN (yesterday) with Baby. I had a sneaking suspicion that his ears STILL weren't cleared up, as he kept crying at naptime and bedtime and wasn't wanting to lay his head down. So Hubby met with our regular Dr.'s partner, who discovered that Baby's right ear was (still) red, but also that 3 of his molars are cutting through (even though he still only has TWO bottom teeth and FOUR top teeth?And suddenly he's cutting his 2 year molars? At eighteen months? This kid is soooo backwards!). So to play it safe, he's back on the Zithromax for another 5 days.

Even more unsettling, though, was the fact that this Dr. told Hubby that Baby should be saying 10-20 words at his age. Ummmm....he says MAYBE 3...."Mama", "Dada" and "Moh" (meaning "more"). So we have been provided with the telephone number for the an early intervention speech facility. A speech therapist will come right to our house to evaluate Baby. I'm struggling with this though. Part of me is sooooo not worried about him. He has 2 older brothers! Why would he bother to try to talk? He totally gets his point across to (all of) us without using words.....when he's thirsty, he reaches in the drawer for a cup. When he wants a snack, he either stands at the pantry door, the refrigerator door, or else he gets himself a snack cup and hands it to me. I can pretty much decipher his every want and need, as can his Father and brothers. The kid totally makes it known what he wants, without having to "use his words".

And whatever happened to Age 2 being the age when kids "should" be saying words and parents should BEGIN to start worrying? Baby is only 18 months old! Part of me feels that Baby may not even speak until he's 3, but that when he finally does, it will be in complete sentences. He completely hears and understands what we say to him now, and he can follow 2 and 3 step commands. So....I'm quite confused and torn about this whole "early intervention" process. I have mixed feelings about calling the place now, or just waiting until he's 2. So anyways, we have the phone number, but haven't yet made the call.....